The number of people using Focus Ireland homelessness services is at an all-time high, according to its annual report.

The report says the charity cannot keep pace with what it described as a deepening crisis. 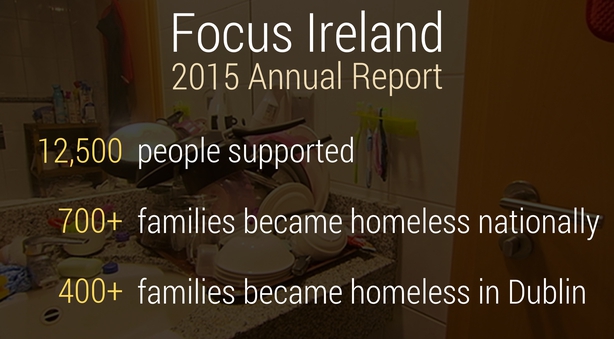 Focus says the risk of children being forced to sleep rough with their families because emergency accommodation is unavailable is now an everyday reality.

The charity says the Government's Action Plan is essentially silent on the matter and called on a directive to be issued to ensure no family can be left without an offer of emergency accommodation.

The charity's founder, Sr Stanislaus Kennedy, said that the response to homelessness was still based on legislation which is 25 years old.

She said the outdated system needed to be updated to reflect the new reality.

Latest figures show there are now over 900 families and 2,000 children without a home across the State.

Focus says it plans to provide 600 more homes over the next four years to help tackle the problem.

Minister for the Environment Simon Coveney said the Government could have, and should have, done more to tackle homelessness in the last five years.

Mr Coveney, speaking at the launch of the Focus Ireland report, said homelessness is now the most pressing social and economic issue in the country.

The minister said the Government's plan to address the issue has committed over €5bn over the next five years to build over 47,000 social housing units.

He also said that if there are gaps in legislation with regard to protecting homes from vulture funds then the Government will closely examine them with the aim to ensure that the rights of tenants and borrowers are protected.