The Irish Farmers' Association has said a proposed merger of ABP and Slaney Meats would substantially lessen competition in the beef sector.

IFA President Joe Healy said the merger would be bad for both farmers and consumers.

ABP is owned by Larry Goodman, a dominant player in the Irish livestock sector.

The IFA are linking the publication of a consultants report into the proposed merger, commissioned by the union, to the row with the Goodman group two weeks ago which resulted in the suspension of the collection of IFA fees by the ABP group.

The report, which was drawn up by PMCA economic consultants, raised serious concerns about competition issues that arise of the joint venture were given the go ahead.

It found that the Goodman group and Slaney Meats between them would end up controlling nearly 26% of all cattle slaughtering nationwide, and more than 36% of the premium cattle market nationwide.

An ABP spokesperson said: "ABP Food Group is in a regulatory process with the EU Commission regarding the proposed 50:50 joint venture with Fane Valley Co-Op in relation to Slaney Foods.

"The company is aware of the IFA report and is confident that the transaction will be approved in the coming months. It is not appropriate to comment further while this process is ongoing."

Farmers have held protests against the merger.

Then minister for agriculture Simon Coveney in February announced he would refer the plans to the Competition and Consumer Protection Commission. 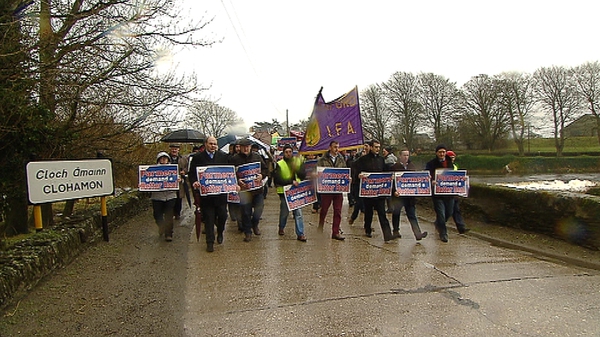