Six people who went into isolation for a year in Hawaii to help NASA plan for a mission to Mars have emerged.

The team was based on a barren, northern slope of Mauna Loa, living inside a dome that is 11 metres in diameter and six metres tall.

French astrobiologist Cyprien Verseux said that he was "feeling excited" about being in the open and eating fresh food again.

The most challenging aspect of the experiment was the monotony, he said in a Periscope interview by organisers posted on Twitter. 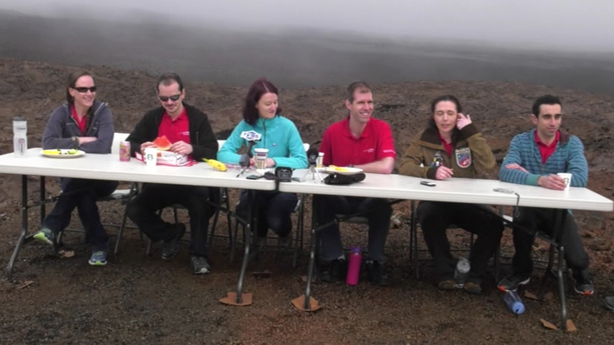 Crew members experienced no seasons inside the dome, and were able to go outside only dressed in spacesuits.

Nevertheless he was upbeat about the experiment results.

"A mission to Mars in the near future is realistic," he said. "The technical and psychological problems can be overcome."

The crew also included a German physicist and four Americans - a pilot, an architect, a doctor/journalist and a soil scientist.

The dome was located in a place with no animals and little vegetation around. The team locked themselves in on 28 August 2015.

The men and women had their own small rooms, with space for a sleeping cot and desk, and spent their days eating food like powdered cheese and canned tuna.

NASA's current technology can send a robotic mission to the Red Planet in eight months, but any astronauts that would travel to Mars face a trip that would take between one and three years.

A typical current stint for an astronaut aboard the orbiting International Space Station is six months.