US Democratic presidential candidate Hillary Clinton leads her Republican rival Donald Trump by five percentage points among likely voters, down from a peak this month of 12 points, according to the Reuters/Ipsos daily tracking poll released today.

The 22-25 August opinion poll found that 41% of likely voters supported Mrs Clinton ahead of the 8 November presidential election, while 36% supported Mr Trump.

Some 23% would not pick either candidate and answered "refused," "other" or "wouldn't vote".

Mrs Clinton, a former secretary of state, has led real estate developer Trump in the poll since Democrats and Republicans held their national conventions and formally nominated their presidential candidates in July.

Mrs Clinton’s level of support has varied between 41 and 45% during that period, and her lead over Mr Trump in the tracking poll peaked this month at 12 percentage points on Tuesday.

During the past week, Mrs Clinton has been dogged by accusations by Mr Trump, which she has denied, that donations to her family's charitable foundation influenced her actions while she was secretary of state from 2009 to 2013.

Questions have also surfaced again about her use of a private email server and address rather than a government one during her period at the state department.

Meanwhile, Mr Trump and Mrs Clinton also sparred over who would be a better advocate for African Americans and other minorities, and Mr Trump hinted he could soften his hard-line stance on immigration.

In a separate Reuters/Ipsos poll that includes candidates from small, alternative parties, Mrs Clinton leads the field by a smaller margin.

Some 39% of likely voters supported Mrs Clinton in the four-way poll, compared with 36% for Mr Trump, 7% for Libertarian candidate Gary Johnson and 3% for Green Party nominee Jill Stein.

Both polls were conducted online in English, in all 50 states. They included 1,154 likely voters and have a credibility interval of three percentage points.

The results may differ from the Reuters/Ipsos States of the Nation project, which includes a separate weekly tracking poll that measures support for the major party candidates in every state and Washington DC.

The States of the Nation, released on Wednesday, estimated that if the election were held now Mrs Clinton would have a 95% chance of winning by a margin of about 108 votes in the Electoral College, the body that decides the election through a count of the candidates' wins in each state. 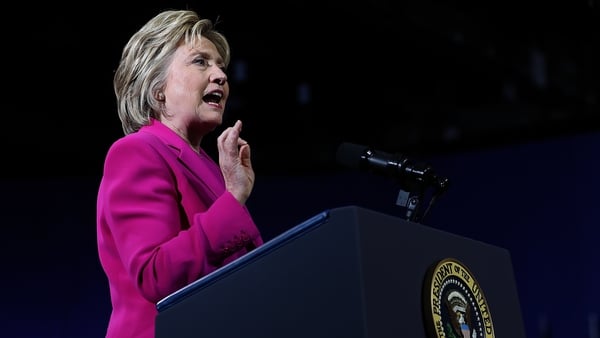