Melania Trump, the ex-model and third wife of Republican presidential nominee Donald Trump, has denied reports that questioned whether she had worked illegally as an immigrant.

"There has been a lot of inaccurate reporting and misinformation concerning my immigration status back in 1996," Ms Trump said.

"Let me set the record straight: I have at all times been in full compliance with the immigration laws of this country. Period," she said.

"Any allegation to the contrary is simply untrue." Ms Trump became a US citizen in 2006, a year after she married the New York billionaire.

Politico raised questions about her immigration status when she first came to the United States to work as a model in the mid-1990s.

Photographs of her, which were published in the New York Post tabloid this week, "inadvertently highlight inconsistencies" in the various accounts she has provided over the years, Politico said.

"Immigration experts say, there's even a slim chance that any years-old misrepresentations to immigration authorities could pose legal problems for her today," the news site reported.

Mr Trump has campaigned aggressively on a platform promising to wipe out illegal immigration to the United States.

It is the third controversy involving his wife in less than three weeks.

On 18 July she delivered a speech at the Republican National Convention that plagiarised a speech by First Lady Michelle Obama, a scandal initially dismissed as "absurd" by the Trump campaign, but which they later admitted.

A Trump staffer subsequently apologised, saying she had inadvertently included phrases from Ms Obama in the speech after Ms Trump read them out as examples of the message she wanted to convey.

Last week, Ms Trump also confirmed that her professional website had been deleted after US media questioned its claim that she had a degree in architecture from the University of Ljubljana in Slovenia.

The website had been removed "because it does not accurately reflect my current business and professional interests," she tweeted.

In recent interviews, Ms Trump herself did not claim that she had a degree, only that she had "studied" design and architecture before dropping out to pursue a modelling career in Milan and later Paris.

After the New York Post published the pictures this week, the Trump campaign said the images were "nothing to be embarrassed about" and "a celebration of the human body as art". 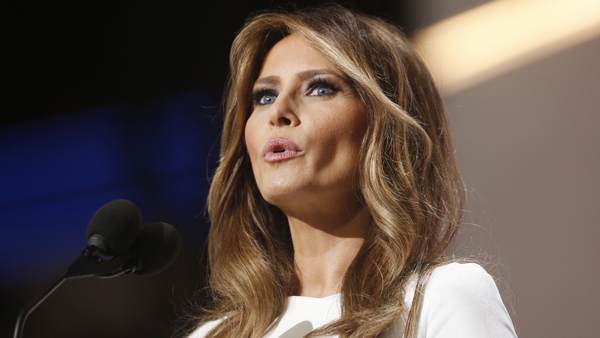