Pope Francis has prayed silently in tribute to 1.5 million people, most of them Jews, who died in the former Nazi death camp at Auschwitz-Birkenau during World War II.

Marking the third day of his trip to Poland for an international gathering of Catholic youth, Francis spent a few minutes speaking quietly and exchanging gifts with about 12 Auschwitz survivors, including a 101-year-old woman.

One of the survivors gave the pope a picture of himself surrounded by other inmates in a bunk, and asked Francis to sign it.

The pontiff kissed each survivor. 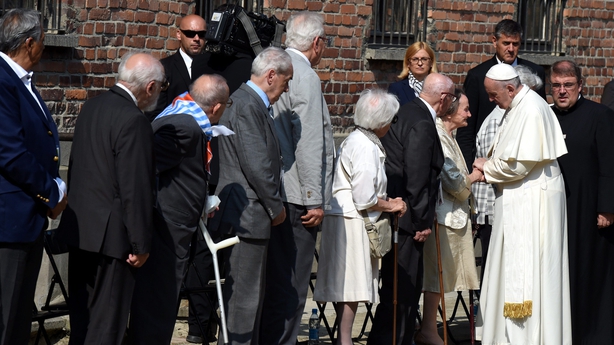 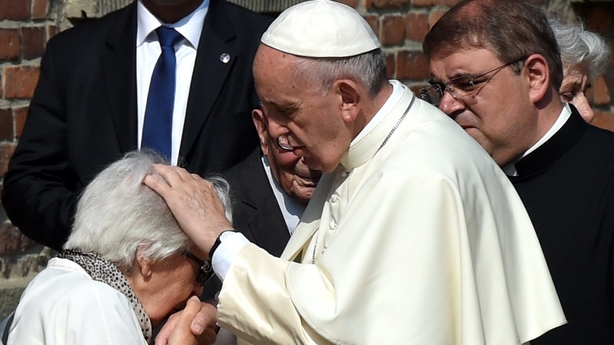 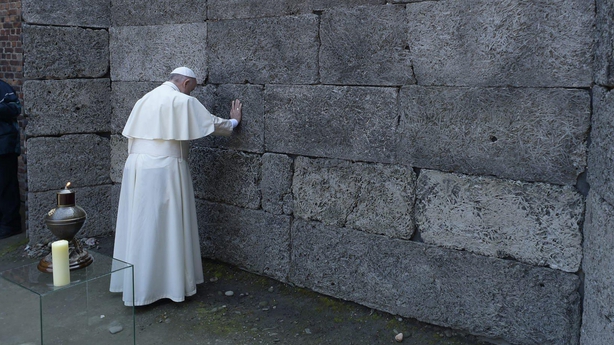 He made no statement as he proceeded to walk through the barely-lit corridors of the drab, brick building of Auschwitz Block 11 which had housed prisoners selected for special punishment.

Before his trip, Francis said he had decided that silence in prayer was the best way to pay tribute to those who died.

With aides using small flashlights to light his way, Francis visited the underground cell where Franciscan monk Maksymilian Kolbe was killed after offering his life to save a Polish man whom camp handlers had picked to die of starvation.

In Auschwitz's commemorative book, Francis wrote in Spanish: "Lord, have mercy on your people. Lord, forgiveness for so much cruelty".

IN PICTURES - Pope's visit to Poland

German occupation forces set up the Auschwitz-Birkenau camp during WWII in Oswiecim, a town around 70km from Poland's second city, Krakow, in the country's south.

Between 1940 and 1945 Auschwitz developed into a vast complex of barracks, workshops, gas chambers and crematoria.

On 29 July 29 1941, the camp director, in reprisal for the escape of a prisoner, chose ten others and sentenced them to death by starvation.

When the selection was completed, Kolbe stepped forward and volunteered to die in place of one of them, Franciszek Gajowniczek.

The monk was later killed by lethal injection but the man he saved survived the war. He was made a saint in 1982 by then-Pope John Paul II.

Today – the 75th anniversary of Kolbe's sacrifice - Francis  visited Birkenau, a part of the camp where most of the killings were committed in gas chambers.

He walked solemnly past guard towers, barbed wire fences and remains of crematoria that the Nazis blew up before the camp was liberated by the Soviet Red Army on 27 January 1945.

Francis listened silently as Poland's chief rabbi, Michael Schudrich, and a priest recited Psalm 130 metres away from the end of the infamous single rail track where cattle cars brought hundreds of thousands of prisoners to the camp.

During a visit to Rome's synagogue in January, Francis appealed to Catholics to reject anti-Semitism and said the Holocaust, in which some six million Jews were killed, should remind everyone that human rights should be defended with "maximum vigilance". 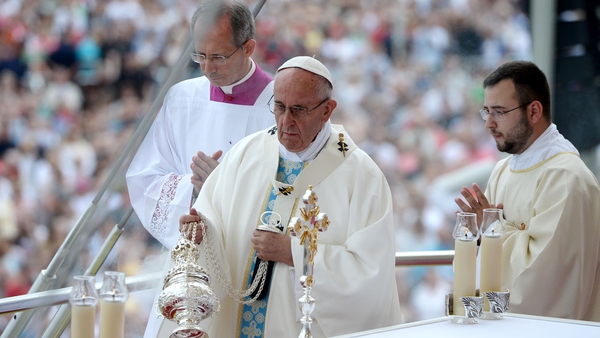 Pope unhurt after fall during mass in Poland