Ireland will have to reduce its carbon emissions by up to 30% compared to 2005 levels between now and 2030 in order to meet binding new targets set by the EU.

The move is part of an overall commitment made by the union two years ago to reduce overall emissions by 40% compared to 1990 levels by the end of the next decade.

The Europe-wide industrial and power sectors, which are covered by the EU Emissions Trading System (ETS), will by 2030 have to reduce their emissions by 43% compared to 2005 levels.

The binding target for the non-ETS sector across the union, which includes the transport, buildings, agriculture, waste, land-use and forestry areas of the European economy, is a reduction of 30% by 2030.

According to the EU, the targets are based on the principles of fairness, solidarity, cost-effectiveness and environmental integrity.

Ireland is already expected to miss its existing 2020 target to reduce carbon emissions by 20% compared to 2005 levels.

According to the latest analysis from the Environmental Protection Agency, Ireland could breach that target by 6-11%.

That target was part of an overall commitment by the EU to reduce greenhouse gases by 20% compared to 1990 levels by the end of this decade.

Agriculture is Ireland's largest carbon emitter, responsible for 47% of the total.

The next largest emitting sector is transport, at 29%.

Under the 2030 targets, published this morning, Ireland's overall reduction target is 30%.

However, one-off flexibility allowed under the Emissions Trading System, and flexibility for the land use sector, could reduce that by up to 9.6%.

Minister for Climate Action Denis Naughten said his department had been having extensive engagement with the European Commission and had presented them with a lot of data.

Speaking to RTÉ News, he said his officials are now analysing the data published today to see what the impact would be for Ireland.

It is important that the targets are achievable, implementable and practical, he said, as there was not much point in putting in place targets that cannot be achieved.

He said while there is more work to be done in reducing emissions from the agriculture sector, it is important to recognise that agriculture has taken a lead.

Ireland now has the lowest carbon footprint for milk production in the EU, and the fifth lowest for beef, he said. 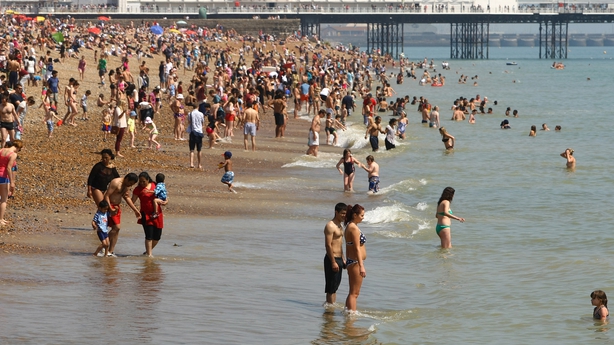 Last month was the hottest June in modern history, marking the 14th consecutive month that global heat records have been broken, the US National Oceanic and Atmospheric Administration said.

"The globally averaged temperature over land and ocean surfaces for June 2016 was the highest for the month of June in the NOAA global temperature dataset record, which dates back to 1880," the agency said in a statement.

"This marks the 14th consecutive month the monthly global temperature record has been broken, the longest such streak in the 137-year record."

The report, issued each month by NOAA, also said the global temperature for the first six months of 2016 was the hottest on record.

The combined average temperature over global land and ocean surfaces for June was 0.9 degrees Celsius above the 20th century average of 15.5 Celsius.

NOAA also spoke about what it calls the "monthly temperature departure" or record spikes in heat.

It said 14 of 15 of these spikes have occurred since February 2015, signaling that global warming is accelerating.

The planet's average land temperature in June was 2.23 degrees Fahrenheit higher than the 20th century monthly average, tied at an all-time record for June that was struck last year.

The land temperature also hit a record high for the first six months of the year.

Experts say global warming is at least partially to blame for a number of environmental disasters around the world, from the bleaching of the Great Barrier Reef off Australia to wildfires raging across Canada.

Last year marked the hottest on record, beating 2014, which previously held the title.

With 14 months in a row now setting records for heat, 2016 - now half over - is on track to be another scorching year.