The recently reappointed deputy head of Fine Gael has said his job now is to rebuild, reorganise and prepare the party for the next general election.

Senator James Reilly, who lost his seat in the Dáil in February, said there was "logic" to have a non-Cabinet member in the role.

Mr Reilly said while he and Enda Kenny have always been "politically close" his duty as deputy leader is to the party.

He said his job was to talk to party members to canvass their views "to see how we can make ourselves ready for a forthcoming election, whenever that may be".

Minister for Housing, Planning and Local Government Simon Coveney earlier said there will be a time in the "not too distant future" when leadership of Fine Gael party will have to be discussed.

But he warned against a long drawn out process, which he said would distract the Government from delivering on issues for the country.

Mr Coveney said the leadership of the party is a question for the Taoiseach and said Enda Kenny will have thought through what he needs to do for the next few years in the interests of the Government and the party.

His comments follow a meeting of Fine Gael TDs and senators last night, which heard calls for the party to begin considering who will lead it after Mr Kenny steps down.

Mr Coveney also said he did not see the re-appointment of Mr Reilly as deputy leader coming but he is not surprised and it is not a big deal.

Fine Gael TD Jim Daly has said he would expect Mr Kenny to announce his leadership intentions after the budget.

Mr Daly said Mr Kenny has always said he would not lead the party into the next general election.

Speaking on RTÉ's Morning Ireland, he said: "Enda Kenny has made it clear to the parliamentary party and indeed to the public that he won't lead us into the next election - that he is going to be walking off the stage.

"I think I'm quite happy to let the man have his time for the moment to do that".

Mr Daly added that Fianna Fáil have "signed up to three budgets" and he believes that Mr Kenny will make his intentions clear following the next budget.

Fianna Fáil TD Timmy Dooley has said that if there is a change in the Fine Gael leadership after the budget, it does not change the position of his party.

Speaking on RTÉ’s Drivetime, he said Fianna Fáil’s arrangement with Fine Gael is for three budgets and in dealing with motions of confidence.

There was also criticism at last night's meeting of the Taoiseach's decision to accede to demands by Independent Alliance ministers for a free vote on a controversial bill on fatal foetal abnormalities.

Mr Daly said the decision could damage and undermine the authority of the Taoiseach and the Government.

He said he is concerned about the Cabinet not acting as a collective but said he has been assured by Mr Kenny that it is a "one-off" and will not be tolerated again.

The Cork South-West TD said he registered his "unease and disquiet" with Mr Kenny and said he believed Minister for Transport Shane Ross was being "opportunistic" in relation to a bill that Mr Daly said is unconstitutional.

The Fine Gael Parliamentary Party Chairman, meanwhile, has said a leadership contest must be planned properly to prevent instability and avoid triggering a general election.

Speaking on RTÉ’s Today with Sean O'Rourke, Martin Hayden said Mr Kenny is the best person at present to lead the country and negotiate the best deal for Ireland post-Brexit.

The Kildare South TD said it was very difficult for the Taoiseach to put a date on when to look for a new leader in order to avoid instability.

He said some planning would be put into a leadership contest that would be in best interests of the country.

He said there was a good discussion about Fine Gael structures and said there is a  report due in the next ten days examining party structures following its General Election campaign. 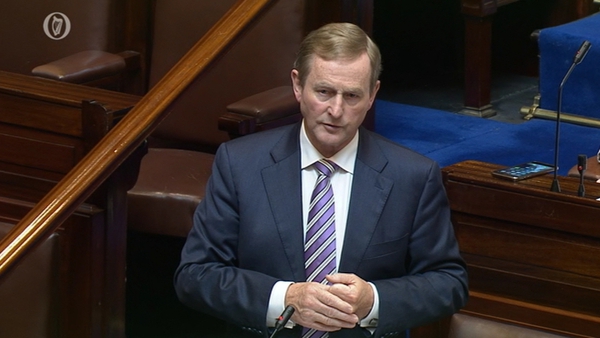