The Juno space probe has arrived in orbit around Jupiter in a historic moment for astronomy after a five-year, 2.3 billion-kilometre voyage.

The spacecraft, named after the Roman goddess, completed a high-stakes manoeuvre that saw it fire a rocket to slow its 250,000km/h approach to the planet.

Cheers and applause erupted in mission control at NASA's Jet Propulsion Laboratory at the California Institute of Technology when a signal arrived confirming the burn was complete at around 4.54am.

He congratulated his team, saying "you've just done the hardest thing NASA's ever done" as the technicians and scientists celebrated completing the complex approach procedure.

However the mission still faces the huge challenge of operating the $1.1 billion probe in one of the solar system's harshest environments, where circuitry-frying levels of radiation and high velocity dust and particles will be a constant threat.

Should all go to plan, Juno's instruments and camera could provide insights into the history of the solar system and return stunning images of the planet.

The spacecraft began the perilous final stage of its journey in the early hours of this morning with a 35-minute blast from its rocket engine.

It was a critical moment for Juno as it hurtled toward the behemoth, with a risk the probe may have shot past the planet and into oblivion if the scientists' calculations were not absolutely correct.

They planned to bring the spacecraft within 4,468km of Jupiter's swirling cloud tops, a region of space blasted by the highest levels of radiation in the solar system.

The titanium-armoured probe's task is to improve our understanding of Jupiter's formation and evolution by using complex instruments to peer through the thick atmosphere and its famous Great Red Spot.

Juno's array will study the gas planet's composition, gravity, magnetic field and the source of its raging winds, while a panoramic camera will also return images of the planet in detail never seen before.

Scientists hope that analysis of Jupiter's interior structure will ultimately help them understand the history and formation of the wider solar system.

It will be some days before Juno begins beaming data and images back to Earth, as the spacecraft's camera and other instruments were switched off for arrival.

The solar powered probe's large solar panels were turned away from the sun for the final approach and will now have to be repositioned.

Dubbed the "biggest, baddest planet in the solar system" by the Juno team, Jupiter is surrounded by a field of high radiation streaked with particles energised by its immensely strong magnetic field.

It also has a ring of dust and rock similar to its neighbour, Saturn, posing a further threat to the probe.

The previous record for a close approach to Jupiter was set by NASA's Pioneer 11 spacecraft which passed by the planet at a distance of 43,452 kilometres in 1974.

Only one previous spacecraft, Galileo, which visited Jupiter and its moons from 1995 to 2003, has orbited the planet.

Juno was launched into space by an Atlas V rocket from Cape Canaveral, Florida, on 5 August 2011. 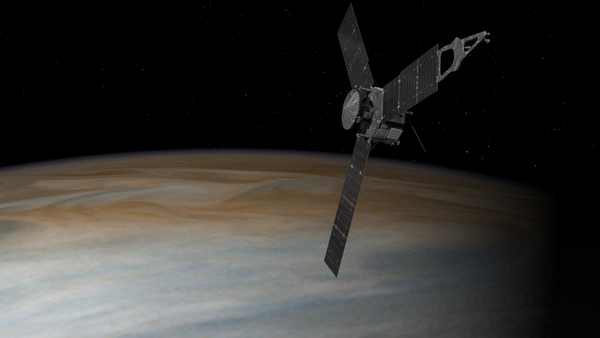