US Vice-President Joe Biden has said his career is in better shape than his golf game, as he kept his promise to play a round in Ireland.

And with a packed clubhouse looking on the two men diplomatically halved the match on the 18th.

Two holes earlier, on the par three 16th, Mr Biden watched nervously as his tee shot narrowly missed a water hazard before hinting that the Taoiseach had the upper hand.

Asked how his golf game was going, the Vice-President said: "It's going.

The round was organised as part of Mr Biden's six-day trip to Ireland, a private and personal visit designed for him to trace his ancestral roots before his term in office ends later this year.

He had also promised the tour of Ireland to his son Beau, a veteran of the Iraq war, who died last year from brain cancer before the commitment could be met.

It is understood the long-standing invite to play golf with the Taoiseach in Ireland helped instigate such a long and varied visit from the vice-president.

Ranked several years ago by Golf Digest at 29 in its list of Washington's top 150 golfers, Mr Biden plays with a handicap of 6.3 - up there with John F Kennedy as among the best the White House has seen.

And buoyed by the challenge of a parkland course rather than the wilds of Irish links, Mr Biden was part of a four ball with his brother Jimmy, Mr Kenny and Castlebar club captain Frank Murray.

In full glare of the cameras and members at the back of the 16th green, the vice-president landed his ball a yard from the pond but saved face with a steady chip out of the rough to the heart of the green.

The Taoiseach gave no quarter and he putted his second to within a couple of feet of the hole for the vice-president to call a "gimme".

Tom Prendergast, member of the Castlebar club and owner of the Village Inn in nearby Ballyvary, dismissed any sense of transatlantic rivalry on the fairways.

"It was a wonderful spectacle. Castlebar put on a great show," he said.

"The Taoiseach played some great golf but it was just a friendly."

A mountain ash tree was planted on the course to mark the rare event of a US vice-president playing a round of golf at the club.

Mr Murray revealed later that Mr Biden holed a putt of 25ft on the 18th to put pressure on the others before the match was halved.

"It was a hugely successful day and a privilege for Castlebar Golf Club ... And a huge honour for me as captain," he said.

"It was a terrific match, played in great spirit.

"The vice-president is a very good golfer. He has an excellent game. He told me he had a handicap of six at one time and you could tell ... He had a lot of pars out there and a few birdie opportunities."

A massive security operation was mounted around the golf club as the vice-president's 20-strong motorcade swept into town.

Overnight, secret service agents and gardai were on patrol around the course and stationed on every tee and green to secure the course for the visiting dignitary.

Mr Biden's ancestral connections with Co Mayo have been traced back as far as the late 1700s.

Mr Biden will return to Dublin for a series of engagements tomorrow, including at Trinity College and a speech in Dublin Castle, an all-ticket affair but open to the public.

The keynote address will touch on the US and Ireland's shared heritage, as well as "the values of tolerance, diversity and inclusiveness".

A trip to Co Louth on Saturday will also take in sites with ancestral links while Newgrange in Co Meath is also on the agenda. 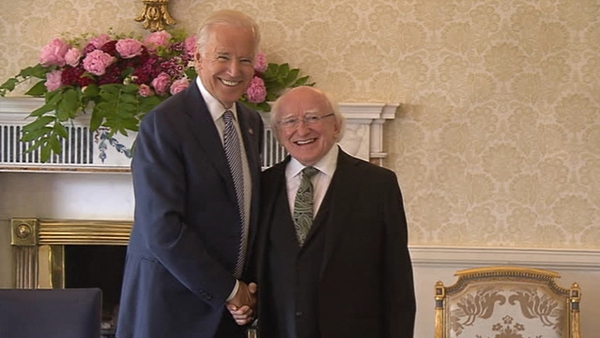