US Vice President Joe Biden has arrived in Co Mayo with several members of his family on a special trip to trace their ancestry.

Mr Biden's US Air Force C17 plane landed at Ireland West Airport Knock for a whistle-stop tour of towns and parishes where his forefathers came from.

A massive security operation will be mounted over the next five days with sweeping road closures and parking restrictions in a number of areas of Dublin as well as towns and villages in Mayo and Louth.

But it is understood Mr Biden is eager to meet the public as he gets a flavour of his Irish roots.

.@VP Biden and Taoiseach @EndaKennyTD on a walkabout in Ballina. @rtenews pic.twitter.com/wmJRnqxLdm 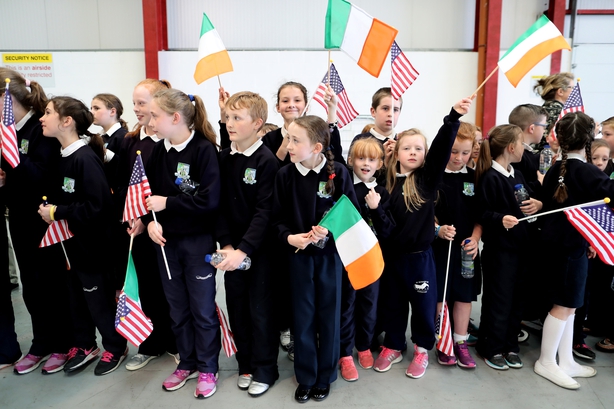 He was greeted by Taoiseach Enda Kenny and dignitaries and 100 flag-waving children from local schools.

The Vice President introduced his family to the children – he is travelling with his sister and brother, daughter and five grandchildren.

Mr Biden posed for photographs with the children.

Two of the boys managed to grab a word with the Vice President, one asking if he could get a ride back to America on Air Force 2, and the other asking Mr Biden to tell Barack Obama that he thought he was great.

The Taoiseach and the Vice President then travelled on to Ballina.

Mr Biden will meet a number of distant relatives as he tours the west.

Before travelling to Mayo the vice president had talks with President Michael D Higgins on Irish, European and current global affairs including human rights.

They also discussed issues facing the European Union and the peace process in Northern Ireland. 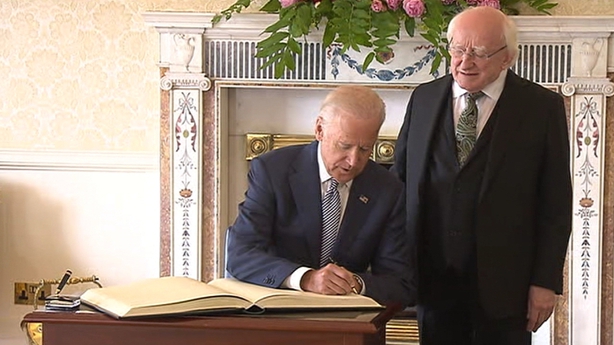 A spokesman for President Higgins said he commended the vice-president on his work on the elimination of all forms of violence against women, while undocumented Irish in the US was also on the agenda.

Mr Biden has made several private visits to Ireland but made no secret of his wish to visit before his term in office ends later this year.

He had promised it to his son Beau, a veteran of the Iraq war, but he died last year from brain cancer before the commitment could be met.

Among other engagements in the west of Ireland tomorrow is a game of golf with Mr Kenny, which will see him fulfil a long-standing promise.

Mr Biden will return to Dublin tomorrow for a series of engagements on Friday, including at Trinity College and a speech in Dublin Castle, an all-ticket affair but open to the public.

The keynote address will touch on the US and Ireland's shared heritage, as well as "the values of tolerance, diversity and inclusiveness".

A trip to Co Louth on Saturday will also take in sites with ancestral links while Newgrange is also on the agenda.

Before he returns to Washington on Sunday, Mr Kenny will host a lunch for the US vice-president at the State-owned Farmleigh House in Dublin's Phoenix Park. 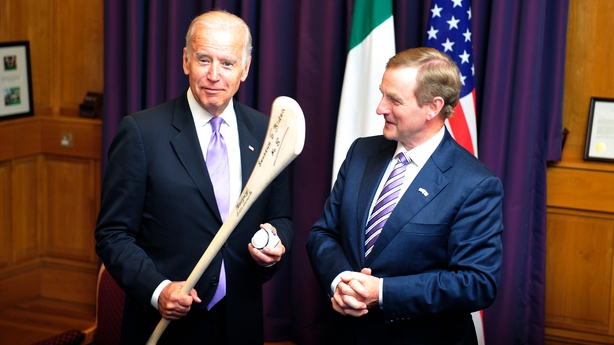 Mr Kenny has already presented Mr Biden with a hurley and sliotar, with the vice president joking that hurling was "a dangerous game". 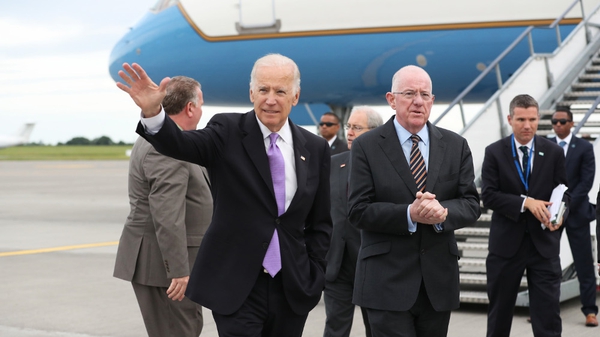