The Government will appeal the recent decision by the High Court to grant designation of parts of Dublin's Moore Street as a national monument.

Taoiseach Enda Kenny confirmed that the decision was made at today's Cabinet meeting.

During the Order of Business, Mr Kenny said the matter would be applied to the Court of Appeal to "straighten out" the road ahead regarding national monuments.

He said the minister is anxious to have a consultative forum comprising of people in the area.

He said the 400-page High Court judgment is "complicated", and he pointed out that it is the first time that the High Court has determined that a national monument is on private property.

He said the appeal was required to inform the Government as to what it can and cannot do with respect of national monuments.

The Minister for Arts, Heritage and the Gaeltacht, Heather Humphreys, said the judgment widens the scope of the national monument status in an "unprecedented manner", setting a precedent which could affect ital infrastructure projects.

Ms Humphreys said the decision to appeal was made following consultation with other Government departments and agencies, including the Office of Public Works and Transport Infrastructure Ireland, who raised "serious concerns".

"My Department and other Government departments are very concerned that this judgment could be used as a means to obstruct or delay planning and development right across the country," she said.

The 1916 Relatives Association, the group who took the original legal action, say they will fight it in the appeal courts.

Colm Moore, the individual who took the action on behalf of the association, rejected the claim that the Moore St judgment could set a precedent.

"It is an unique site, it's in the judgment. So no other site or area comes into the equation"

Mr Moore rejected claims that the preservation of the laneways could impede roadworks.

He said there is no preservation order in place and the Minister can grant permission for works at any stage.

"In my view the only rationale behind this is to build a shopping centre," he added.

Ms Humphreys said she intends setting up a consultative group on the future of Moore St which would have an independent chair and include interested groups and cross-party membership.

"I have considered whether it would be possible to appeal sections of the judgment, but that is not a viable legal option. If I did not to appeal this judgment, I would be ignoring very strong advice from the Attorney General, the Departments of Environment and Transport, the OPW and Transport Infrastructure Ireland that an appeal is necessary in the interests of planning and development projects nationwide".

The Government's decision to appeal the judgment delivered last March comes just before a legal deadline next Thursday. 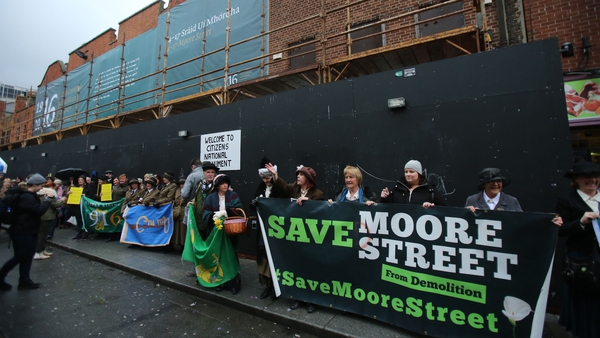