The suspect behind the Orlando mass shooting at a gay nightclub in which 50 people died was named earlier as 29-year-old Omar Mateen from Port St Lucie, Florida.

He was armed with an assault-type rifle and handgun when he sprayed revellers with bullets at the popular venue Pulse.

It is thought there were more than 300 people inside the building at the time of the attack, which has now become the worst mass shooting in American history.

The shooter called 911 and swore allegiance to IS before the shooting, according to NBC news.

However, the gunman's father told US media that the attack had "nothing to do with religion".

Mateen's father said that it might have been a homophobic attack.

He was an American citizen and he born in New York, a federal official said.

His parents were immigrants from Afghanistan.

Mateen had been licensed as a private security officer in the American state and had held a firearms licence since at least 2011 - which was due to expire in September next year.

He legally purchased the firearms used in the attack within the last week, police said.

Mateen had previously been investigated for ties to an American suicide bomber, the FBI said today.

Special Agent Ronald Hopper told reporters that Mateen had been cleared by the previous probe. 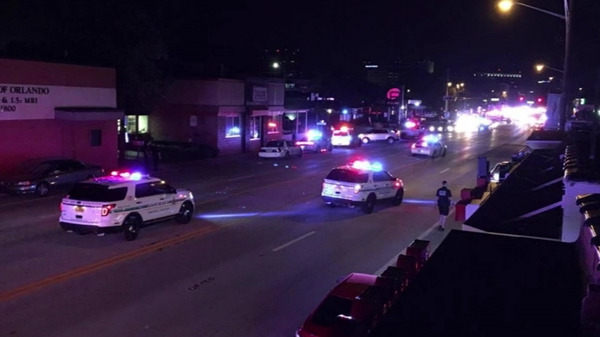 49 dead, 53 injured in worst mass shooting in US history