An opinion poll released today gave supporters of British EU membership a narrow lead over opponents, a day after another survey had the 'Leave' campaign 10 points ahead, underlining how contradictory polling for the 23 June referendum has been.

The pound weakened by as much as 1.2% against the dollar immediately after the ORB poll for the Independent newspaper was published last night.

The ORB poll put the scores at 55% to 45% in favour of pulling out, after allowing for an individual's likelihood to vote.

Betting odds on a British vote to exit the EU also shortened after the survey put the 'Leave' camp 10 points ahead of 'Remain', the latest in a run of polls to show rising support for a British exit from the EU.

But a survey by Opinium for the Observer newspaper published today, suggested 44% of Britons back continued membership of the bloc with 42% against and 13% undecided.

Britons will vote on 23 June on whether to leave the world's largest free trading area, a decision with far-reaching implications for politics, the economy, trade, defence and migration in Britain and the rest of the EU.

Today, bookmaker Betfair cut the odds of a vote to stay, after the ORB poll, giving a probability of 70%, down from 78% earlier this week.

Bookmaker Ladbrokes said the ORB poll had caused it to shorten its odds on Brexit to 9/4 from 11/4 previously, implying a rise in the likelihood of a 'Leave' vote to 30% from 27%.

Yesterday's survey gave the "Brexit" camp their biggest lead since the poll series started a year ago, the Independent said.

But the official Leave campaign reacted cautiously, tweeting: "We don't believe the ORB online poll, our data suggests it's closer to 50-50."

The mixed picture has heightened market jitters about the outcome, with sterling repeatedly reacting to poll results.

Meanwhile, Sinn Féin leader Gerry Adams has called for the Taoiseach to urge people in Northern Ireland to vote for the UK to remain in the EU in the 23 June referendum.

He said Enda Kenny should cross the border and campaign on the issue in the North.

Separately, a group of Britain's most eminent scientists endorsed the 'Remain' campaign today, saying that leaving could damage research.

Thirteen of Britain's top scientists signed a letter backing the campaign to remain in the EU.

Nobel Prize winners including Peter Higgs - after whom the Higgs Boson is named - and geneticist Paul Nurse said the loss of research funding would be one consequence of leaving the bloc.

British inventor James Dyson has rubbished claims British international trade would suffer outside the EU as he backed the campaign to leave Europe.

He branded warnings that Britain would be shunned in international markets in the event of a Brexit as "absolute cobblers".

Speaking to the Daily Telegraph, Mr Dyson criticised employment restrictions for non-EU workers as "crazy" and vented frustration that some British-trained engineers are unable to stay after graduating from university.

"Why on earth would you chuck out researchers with that valuable technology which they then take back to China or Singapore and use it against us?"

The entrepreneur is best known his radical redesign of the vacuum cleaner which, alongside a series of other innovations, has made him one of Britain's wealthiest people with a reported £3.2 billion fortune. 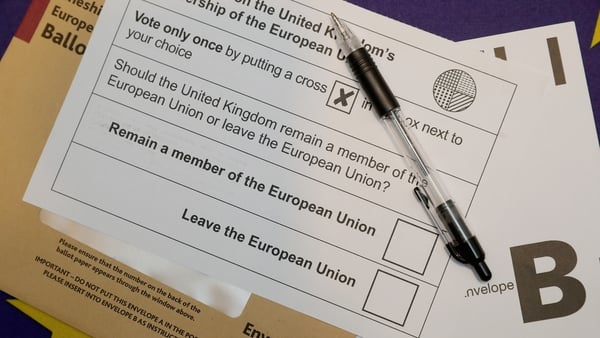