Eurozone governments have offered Greece debt relief in 2018, but left key details for later in a bid to bridge Germany's view that no immediate action was needed and the International Monetary Fund's call for decisions now.

The late-night compromise spared the European Union the risk of another Greek crisis this year, less than 12 months after Greece was on the brink of ejection from the currency area by rejecting austerity measures and defaulting on an IMF loan.

After talks that lasted into early this morning, Eurogroup ministers agreed to release €10.3bn in new funds for Greece in recognition of fiscal reforms pushed through by Prime Minister Alexis Tsipras's leftist-led coalition, subject to some final technical tweaks.

But the bigger step forward was the debt relief deal because it provided investors with more certainty that their money in Greece would be safe, paving the way for a return to market financing for Greece in 2018 and for foreign direct investment.

Markets received the deal with enthusiasm even though it is still highly conditional.

"The possible debt relief will be delivered at the end of the programme in mid-2018 and the scope will be determined by the Eurogroup on the basis of a revised Debt Sustainability Analysis," a statement by eurozone ministers said.

"The Eurogroup ... provided a road map on debt relief, which is credit positive as it signals a growing consensus among euro area member countries and the institutions, namely the IMF and the European Commission, on debt relief," Moody's Investors Service said in a statement.

The agreement on debt is a political victory for Greece and could bring the IMF to participate in the latest Greek bailout, so far shouldered by the eurozone alone.

It is also a major concession on the part of the IMF, which insisted on debt relief decisions up-front.

The fund will now analyse the terms agreed by euro ministers to see if they would guarantee long-term Greek debt sustainability.

If they do, the IMF's management will recommend to its board by the end of the year to join the Greek bailout.

There was no discussion at the meeting of the possible length of the new IMF programme for Greece or its size, officials said.

The vague wording of the debt agreement, however, was key for Germany, which holds general elections next year and where financial help for Greece is a highly controversial issue.

"We have no major changes to the [Greek] programme, so there is no need for a prior vote of the Bundestag," German Finance Minister Wolfgang Schaeuble said, calling it a good result. 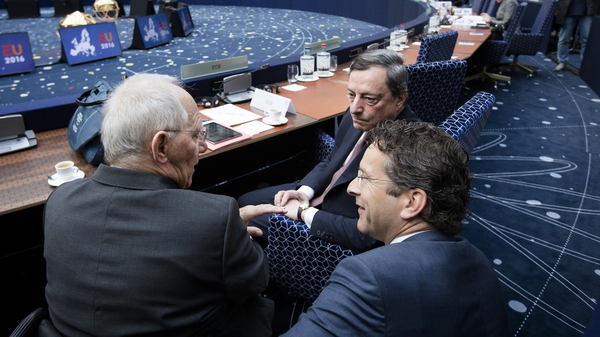