The approximate dates for a papal visit to Ireland have been published with the announcement that Pope Francis has decided that the World Meeting of Families will be held in Dublin in 2018.

Earlier this month, Archbishop of Dublin Diarmuid Martin said the pope had told him that either he or his successor will visit Ireland for the event, which the Vatican announced this morning will take place in Dublin from 22 to 26 August 2018.

Archbishop Martin said that although the three-yearly gathering will be held in Dublin, it will be "an event of the entire church".

A statement from the diocesan office in Drumcondra said it is too early to know if the Pope will attend the gathering and that his programme is normally announced just a few months in advance.

It recalls that Pope Francis has expressed his desire to attend, but emphasises the final decision will depend on many factors.

Head of the Pontifical Council for the Family Archbishop Vincenzo Paglia said it is expected that 10,000 pilgrims will attend the Dublin gathering.

The theme of the event, which takes place in different parts of the world, is 'The Gospel of the Family: Joy for the World'.

The Archdiocese of Dublin is the host diocese for the event.

Archbishop Martin said it was significant that Pope Francis chose the family as the theme of the first Synod of Bishops of his Pontificate and that he launched a new methodology for the Synod, which would involve consultation with families.

The Dublin meeting will be prepared for by a process that will take place right across the church in Ireland during 2017 and 2018, but it, more than earlier meetings, should be a world event even in its preparation, Archbishop Martin said.

The Church of Ireland Archbishop of Dublin, Dr Michael Jackson, has pledged his church's willingness to assist the 2018 World Meeting of Families in Dublin in whatever ways his Roman Catholic "brothers and sisters in Christ think may be helpful".

In a statement, he said the event would "of considerable significance right across society in general".

"Wherever people congregate and share lives, issues associated with family life, care and nurture are always to the fore," he observed.

"The World Meeting of Families intends to open wide its doors in generosity of invitation to all interested parties. We in the Church of Ireland tradition recollect with great joy the ways in which we were included in The International Eucharistic Congress (IEC) and pledge our willingness to assist in any ways that our brothers and sisters in Christ think may be helpful," the statement continued.

The 50th IEC was held in Dublin between 10 and 17 June 2012. Archbishop Jackson was a main speaker during its proceedings. Pope Benedict XVI was too unwell to travel to Ireland for the event and sent a video message instead.

Archbishop Jackson congratulated Archbishop Martin, and the other principal co-organiser of the event, Archbishop Vincenzo Paglia, president of the Pontifical Council for the Family.

He noted that the Italian prelate has been a friend for more than a decade through the Community of St Egidio in Rome whose global peacemaking initiatives have embraced the protagonists in the Irish peace process. 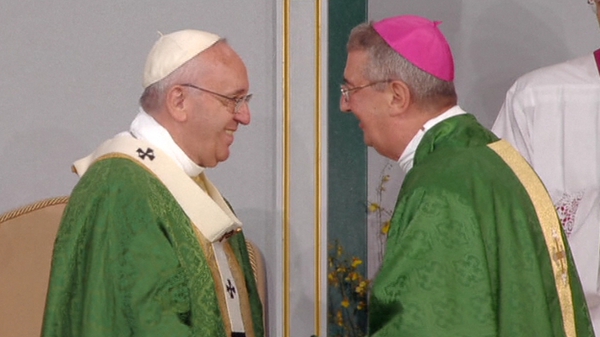