President Michael D Higgins has highlighted the issue of violence against women and girls across the globe on the second day of the World Humanitarian Summit in Istanbul.

In a statement to 40 world leaders, President Higgins said that just 0.5% of humanitarian funding is spent on gender-based violence.

He said that only 43% of women in emergencies have access to reproductive health services, despite the fact that a majority of women who die during pregnancy or childbirth are to be found in crisis areas.

The President will also meet leaders of the Irish relief agencies Concern, Trócaire and Goal at the summit.

The two-day summit has brought world leaders, government ministers, aid organisations and the private sector together to address a €15bn funding shortfall, and to make the humanitarian system operate more effectively.

However, it has been criticised as an expensive talking shop, with medical aid organisation Médecins Sans Frontières saying it will not force governments to stop the increasing number of attacks on relief workers and hospitals caught up in civil war.

Twenty-one donor countries and 16 aid organisations have agreed a so-called 'Grand Bargain', which could reduce the cost of administering help in crisis situations by €1bn a year.

Under the plan, agencies would both assess needs and buy supplies together in a disaster situation in order to bring down costs.

President Higgins argued that rape continues to be used as a weapon of war, that high rates of maternal and infant malnutrition persist and that in some countries women have no rights or means to control their own fertility.

He also said that the vulnerability of female refugees in Europe to exploitation and violence, as well as the denial of health and education to their children, is a cause of great alarm.

Minister of State for Development Joe McHugh will present the Government's response at the summit, with a greater emphasis on disaster prevention and on helping to prevent the cycle of despair by, for example, by addressing the education needs of child refugees in countries like Lebanon and Jordan. 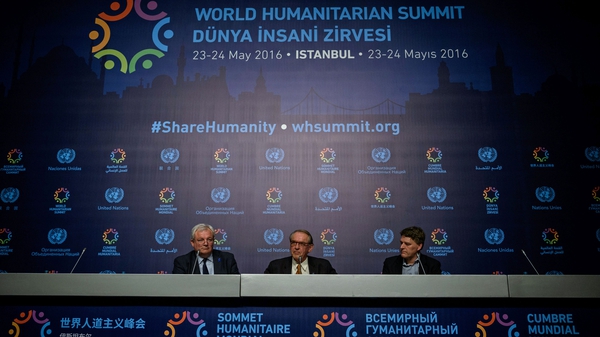