Sinn Féin TD Eoin Ó Broin has said a Private Members’ motion on water charges was not drafted by a political party but by the Right2Water movement.

Opening a debate on water charges in the Dáil, Mr Ó Broin said that at the heart of the movement was a rejection to the commodification of the provision of water services.

He said water should be on need and not ability to pay and public ownership and management of services should be protected in the Constitution.

"Now these same politicians are pleading with us to follow them on their fools’ course to rectify the problem", he said.

He compared Fianna Fáil’s election manifesto on water to the counter motion, which he described as "another Fianna Fáil flip-flop", adding "you've signed up with Fine Gael to build confidence in the entity you sought to abolish".

Fianna Fáil is tabling a counter motion that underpins the agreement between it and Fine Gael to suspend the charges and set up an independent commission to look at the matter, which will lead to a Dáil vote on it.

AAA-PBP Deputy Mick Barry called on every household in the country to boycott their last Irish Water bills.

He said it was incredible that the Government, which had already agreed to the suspension of water charges, had allowed the utility to send out the bills.

Deputy Barry acknowledged that TDs like Simon Coveney had consistency on the issue, but he questioned those who declared support to scrap the charges, but changed their minds again.

He warned independent TDs John Halligan and Finian McGrath that the night they signed up to a Fine Gael-led Government was the night they "crossed a line".

Mr Barry said if they voted to derail a motion supported by the movement they were part of "the full implication of that will be come clear".

He questioned if they would vote against the ruling class and against the wishes of those who elected them a few months ago.

Mr Halligan, who had previously indicated that he would support the Sinn Féin motion, will now be voting in favour of the Government's position.

The Junior Minister said that when the independent commission reports back to the Dáil, he will vote to abolish the charges.

Mr Halligan also said he was not prepared to jeopardise the stability of the Government after securing a deal for the southeast.

The Minister for Housing, Planning and Local Government has outlined to the Dáil the progress of Irish Water since it became a national water utility in January 2014.

By the end of February this year, he said, just over 39 million litres of water per day had been saved through metering.

Minister Coveney said he would establish an Expert Commission to examine and make recommendations on the sustainable long-term funding model for the delivery of domestic water and wastewater services by Irish Water.

He said a Special Oireachtas Committee on the funding of domestic water services will debate the commission's recommendations and ultimately both houses of the Oireachtas will consider and decide on the future of charges and the process should take no longer than nine months from the end of next month.

He said the Government was trying to take some of the heat out of the issue for a nine month window for a debate.

The Government has agreed to support a motion establishing an all-party committee to devise cross-party agreement on a ten year plan for health care.

Minister for Health Simon Harris said he had spoken with deputies from across the House and believed the motion can attract broad support in the Dáil and is one which the Cabinet agreed to back today.

He said the Government had agreed to move ahead quickly to establish the committee and to have it operating in the coming weeks. 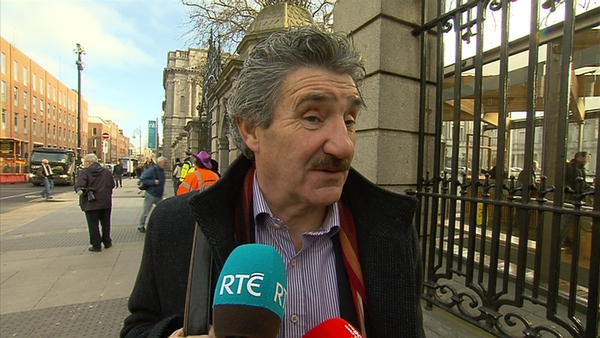