A wildfire burning around the Canadian city of Fort McMurray was growing and moving rapidly north late yesterday, forcing firefighters to shift their focus to protecting major oil sand facilities north of the city.

The sudden movement of the fire prompted the evacuation of some 4,000 people from work camps outside Fort McMurray.

All northbound traffic once again cut off at the city, the Regional Municipality of Wood Buffalo said.

Suncor Energy Inc and Syncrude Canada confirmed they had evacuated workers from the affected area.

Their major facilities were under a precautionary notice with the fire still around 15 to 20km away, officials said.

"The urgency we're looking at is with regards to the oil gas infrastructure," the director of the Alberta Emergency Management Agency told reporters, adding Fort McMurray itself appeared to be safe for now.

The entire population of Fort McMurray, about 90,000 people, was forced to flee nearly two weeks ago as the uncontrolled wildfire raged through some neighbourhoods and destroyed about 15% of structures.

By last night it was moving 30 to 40 metres every minute and had jumped a critical firebreak north of the city to push into the oil sand camp areas.

"When you have this type of extreme fire behaviour, it doesn't matter what tankers you put in front of it, or how many helicopters, mother nature is going to continue to move that fire forward," a wildfire manager said.

He said the blaze was expected to slow into the evening and that it was unclear if it would reach the major oil sand facilities, though responders were preparing for that eventuality.

A Suncor spokeswoman said 120 people were evacuated from its MacKay River plant and camps as a precautionary measure, adding the facilities were not at risk from the fire.

Syncrude, a joint venture among numerous energy companies operating in the region, said on Twitter that it was relocating its workers to safety.

The blaze, about 1km away from the tank farm, was under control with the wind cooperating as the company's industrial firefighters tackled the fire, officials said earlier.

Firefighters have managed to protect much of Fort McMurray but evacuated residents are still not allowed to return to their homes, partly because of hotspots around the community.

Alberta Premier Rachel Notley said there was still no timeline on when residents could return but she hoped to have more information by the end of the week. 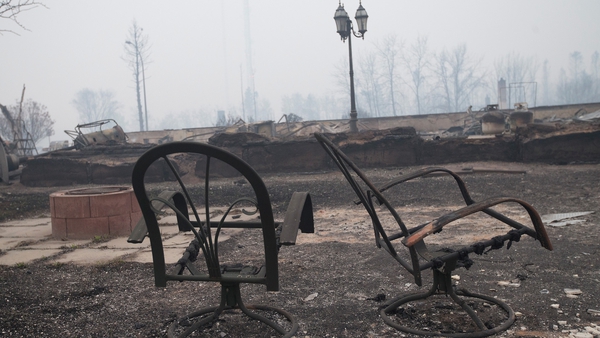