Taoiseach Enda Kenny has introduced the new Cabinet to the Dáil.

Frances Fitzgerald has been appointed Tánaiste and Minister for Justice and Equality and the new Government Chief Whip is Regina Doherty.

The Dáil continued to sit into the evening, when the Cabinet was approved, and it was proposed that it will adjourn until 17 May.

A Dáil vote on approval of the cabinet nominations was due to take place tonight before the new ministers attended Áras an Uachtaráin to receive their seals of office.

The Taoiseach outlined the new appointments this evening: Michael Noonan will remain as Minister for Finance and Charlie Flanagan will stay in Foreign Affairs and Trade.

Former Minister for Health Leo Varadkar will move to the Department of Social Protection while Simon Harris will take over the health portfolio.

Minister for Education is Richard Bruton and Simon Coveney is the new Minister for Housing.

Mary Mitchell O'Connor will take over the jobs portfolio, Michael Creed is the new Minister for Agriculture and Paschal Donohoe will move to Public Expenditure and Reform.

Regional Development, Rural Affairs and Arts and Culture will be the responsibility of Heather Humphreys.

Finian McGrath has been appointed a super junior minister with responsibility for disabilities.

Mr Kenny nominated Máire Whelan for appointment by the President to be the Attorney General.

He said this was not the Government his party wanted to see elected, but it had come down to a stark choice of an administration being formed today or going back to the people in another election.

Labour leader Joan Burton described the new Government as a "coalition of convenience".

Speaking on RTÉ's Six One News, she said it was hard to know, with Fianna Fáil propping up this government, what exactly the Government is really going to be able to do.

Asked about her future as party leader, Ms Burton said Labour would hold a parliamentary party meeting on Tuesday.

She said there was a process in the Labour Party constitution in relation to the leadership.

Ms Burton said when the new Government received its seal of office from the President, the post-government situation in terms of the Labour Party constitution would step into place.

Sinn Féin's Caoimhghín Ó Caoláin was critical of the way the last Government "rail-roaded" legislation and charges, such as water and property charges, through.

He said the electorate demanded change and the days of Fine Gael and Fianna Fáil dominating Irish politics are now over.

Independents 4 Change Tommy Broughan said the new Government has a hackneyed look and said it is the same old failed Fine Gael ministers coming forward to offer a Government.

The Social Democrats Catherine Murphy said: "The last government presided over an unbalanced recovery and tax cuts being prioritised over investment in public services. That cannot be allowed to continue."

The new Minister for Social Protection Leo Varadkar said that if the Government can start to heal some of the fractures in society and reverse income inequality that could be the secret ingredient that sees Fine Gael win a third term in office.

He said that he would like to see Ireland develop a whole new social insurance system as there is a better one in other parts of Europe that should be looked at.

He added that he would like to restore some of the cutbacks that were made to social welfare payments. 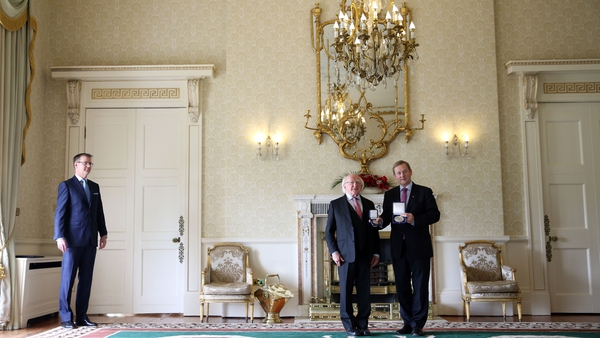