Talks between Fine Gael ministers and Independent TDs over forming a minority government are to continue tomorrow.

Fine Gael are holding talks with two groupings of Independents - the Independent Alliance and the Rural Alliance.

The provision of cardiac services in the southeast has emerged as a key issue for the Independent Alliance.

Emerging from the talks on a break, Minister for Justice Frances Fitzgerald said they are making satisfactory progress but there are quite a number of issues still to be discussed.

She said there are break out sessions working at the moment.

Ms Fitzgerald added there are difficult issues on the table which they are working through and she confirmed that talks with the Independent Alliance TDs will continue tomorrow.

They met with Fine Gael negotiators for a number of hours, during which time they were briefed on the agreement reached with Fianna Fáil.

They also had more detailed discussions on housing and agriculture.

The group have indicated that the Thursday deadline set for the talks is not realistic.

As he arrived for the talks earlier, Minister Richard Bruton said Fine Gael are in a position to form a government and he believes people are coming to the talks in a very constructive way, he said there will always be sticking points in negotiations like this as people see things differently and it will be a test of the new way of doing business.

Waterford TD John Halligan has said the other five members of the Independent Alliance are backing his stance on cardiac services and if a deal cannot be delivered the group will not support Fine Gael.

Asked about Mr Halligan’s demands over cardiac services in the southeast, Mr Bruton said clearly public policy has to be based on a solid foundation and people will want to know a government makes decisions on a basis that is sound and solid.

He also said there are genuine concerns surrounding the issue.

Independent deputy Micheal Fitzmaurice said he would not put a time limit on the negotiations, he said they will give it their best and after that whatever happens happens.

He said if a government is to work it will have to tackle issues such as problems in rural Ireland, health, agriculture and mortgage distress.

Accompanying Mr Fitzmaurice into the talks was David Hall of the Irish Mortgage Holders Organisation.

His party needs support from at least six Independent TDs to secure a minority government.

Fine Gael hopes a deal can be concluded to allow a government to be formed on Thursday but much depends on the kind of detailed agreement that can be reached over the next three days. 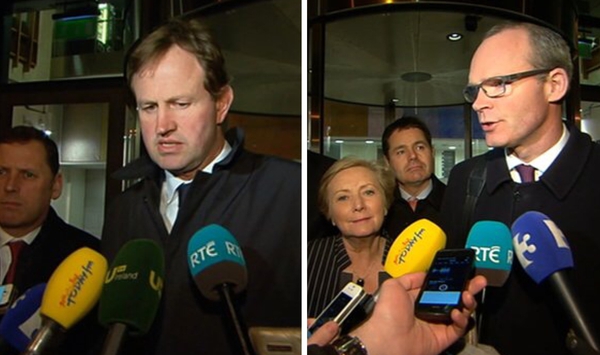