A total of 175 countries have signed the Paris climate agreement at the United Nations, a record for a one-day signing of an international accord, the UN said.

French President Francois Hollande was the first leader to sign the agreement, sitting at a special table set up in the UN General Assembly, he put his signature to the historic accord.

He was quickly followed by the leader of the Marshall Islands.

The moment in which @fhollande signs the #ParisAgreement as 1st country rep to do so. Well done, France! @COP21 pic.twitter.com/pB9p27mabY

"This is a moment in history," UN Secretary-General Ban Ki-moon said at the opening of the formal ceremony at the UN General Assembly.

The agreement commits countries to cut global greenhouse gas emissions and slow the warming of the planet to just 2 degrees, or 1.5 degrees if possible.

196 nations were party to the talks in Paris.

The previous record was set in 1982 when 119 countries signed the Law of the Sea Convention.

However, signing up to the landmark deal, on Earth Day, is just the first step - countries must then ratify its contents within national policies.

The agreement itself will not take effect until at least 55 countries, representing 55% of the world's emissions, ratify it.

Minister for Environment Alan Kelly has said he that he hopes Ireland will ratify the Paris Agreement later this year or early next year, in line with pledges made in the EU.

He was speaking at the United Nations in New York where he signed the agreement on behalf of Ireland, along with 170 other countries.

Minister Kelly said that he felt climate change was such a "critical issue" that he believed the new government should include a cabinet level minister with responsibility directly for climate change, either held jointly with the environment portfolio or entirely separate. 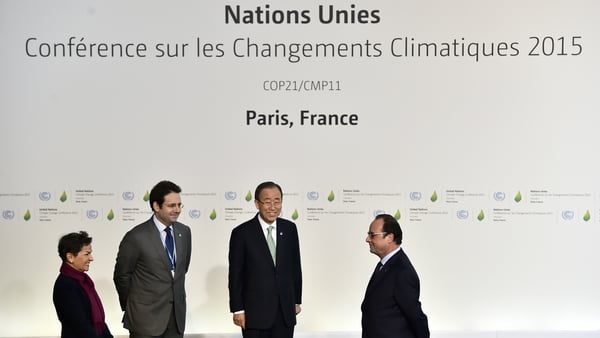