Pope Francis, who visited the Greek migrant hotspot island of Lesbos, took three Syrian families with him on the papal plane back to the Vatican, describing the move as a "humanitarian gesture... (but) a drop in the ocean".

Speaking to reporters on board the flight home, the pope said taking the refugees back had been suggested by an aide a week earlier.

"Everything has been done according to the rules, with the agreement of the Greek and Italian governments," he said. "They have their papers, and everything is in order."

The three families were all Muslim, the Vatican said in a statement earlier.

"I didn't make the selection. These three families had papers which were in order and it was feasible," the pope said.

"There were two Christian families but their paperwork wasn't ready. (Religion) was not grounds for exemption. All refugees are children of God."

Asked about the symbolic nature of his actions, as Europe struggles to deal with its biggest migrant crisis since World War II, the Argentinian pontiff paraphrased Mother Teresa in reply: "It's a drop in the ocean, but after this drop the ocean will never be the same again."

The pope said he understood European fears over the massive number of migrant arrivals but added that "we have a great responsibility for welcoming" them.

The refugee families to be taken in by the Vatican, which include six children, will be initially cared for by the community of Sant'Egidio in Rome, the Holy See said.

They originally lived in Damascus and Deir Azzor, an area currently occupied by jihadists, and have lost their homes to bombings, it said. 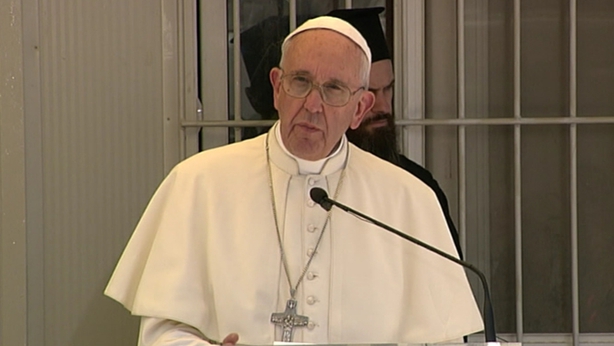 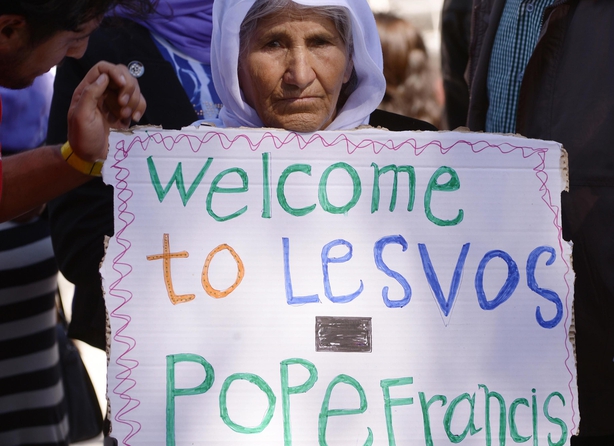 Earlier, Francis shook hands with hundreds of people as hundreds more were penned behind metal barriers at the Moria camp. It holds a total of about 3,000 people.

"Freedom, freedom," migrants chanted as he walked through the hillside facility in the scorching sun.

"I want to tell you, you are not alone," he told them.

"As people of faith, we wish to join our voices to speak out on your behalf. Do not lose hope!" he said, flanked by Patriarch Bartholomew, spiritual leader of the world's Orthodox Christians, and Greek Archbishop Ieronymos.

On at least three occasions, adults fell to the feet of the pontiff, weeping and begging for help. One woman wearing a crucifix broke through a police cordon and flung herself at Francis's feet.

Meanwhile, it has emerged that Pope Francis met US presidential candidate Bernie Sanders this morning before departing for Lesbos, according to a participant at the meeting.

Columbia University Professor Jeffrey Sachs said that the meeting took place in the Vatican guesthouse where the Pope lives and where Mr Sanders had spent the night after addressing a Vatican conference on social justice.

The Vatican said before the conference that a meeting had not been planned. Mr Sachs said he was also at the meeting, as well as his wife and a Vatican official. 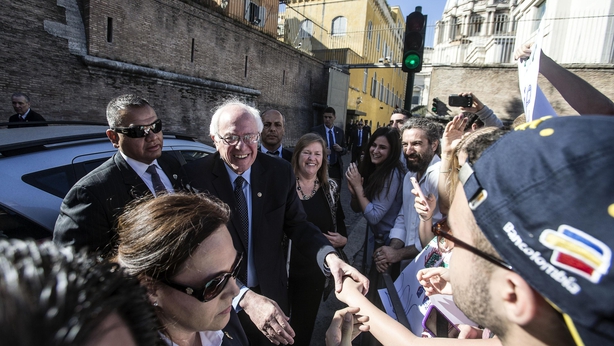