The head of the Catholic Church in Ireland has described Pope Francis's new guidelines on family values as grounded in reality.

Catholic Primate of All Ireland Eamon Martin said the pope's message is one of integration and inclusivity.

In a 260-page document, Pope Francis called for a Church that was less strict and more compassionate towards "imperfect" Catholics, such as those who divorced and remarried, saying "no one can be condemned forever".

The Pontiff said homosexuals should be respected, but firmly re-stated the Church's position that there are "absolutely no grounds" to equate gay unions to heterosexual marriage.

The treatise, called "Amoris Laetitia" or "The Joy of Love", was one of the most eagerly awaited pronouncements of his pontificate.

The pope quoted Martin Luther King, Argentine Poet Jorge Luis Borges and even the 1987 Danish cult film Babette's Feast, to make his case for a more merciful and loving Church.

The keenest anticipation centred on what he would say about the full re-integration into the Church of Catholics who divorce and remarry in civil ceremonies.

Under current Church teaching they cannot receive communion unless they abstain from sex with their new partner, because their first marriage is still valid in the eyes of the Church and they are seen to be living in an adulterous state of sin.

"No one can be condemned forever, because that is not the logic of the Gospel.

"Here I am not speaking only of the divorced and remarried, but of everyone, in whatever situation they find themselves," the pope said. 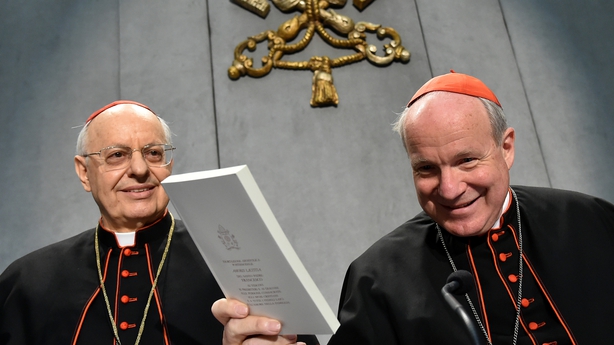 Presenting the document at a packed Vatican news conference, Cardinal Christoph Schoenborn of Vienna, called it "a classic case of the organic development of doctrine," which he described as being a continuation of theological thought without rupture with the past.

Father James Bretzke, professor of moral theology at Boston College, said while the pope did not explicitly give a green light for remarried Catholics to return to communion, "the dots are pretty close together, you can connect them reasonably easily and conclude that he is saying this is a possibility.

"If he's not opening the door, he is at least showing you where the key under the mat is."

The document appeared to be partly aimed at the pope's own bishops, saying while basic tenets of the faith remain, there had to be more consultation and debate within the Church about how they are applied locally in the type of de-centralised institution Francis has called for.

Pope Francis said he understood those conservatives who "prefer a more rigorous pastoral care which leaves no room for confusion "but the Church should be more attentive to the good that can be found "in the midst of human weakness".

"The Church turns with love to those who participate in her life in an imperfect manner," he said, including in this category those Catholics who are cohabiting, married civilly or are divorced and remarried.

The Joy of Love experienced by families is also the joy of the Church.

Archbishop of Dublin Diarmuid Martin has said the document cannot be pigeonholed as either progressive or conservative.

Speaking at a press conference in Dublin, Dr Martin said the paper is moving away from a position of condemnation to one in which it is possible to move forward.

Asked about the issue of gay marriage and if people from that community would be disappointed with the document, he said that there is nothing vitriolic or condemnatory in it.

Ireland's Gay and Lesbian Equality Network said the document "missed the opportunity to reflect and embrace" changes towards the LGBT community in recent years.