The Syrian government has said it would not hold talks with any party wishing to discuss the question of the presidency, calling President Bashar al-Assad a "red line" as it confirmed its participation in UN-led peace talks next week.

"We will not talk to anyone who talks about the position of the presidency. Bashar is a red line, the property of the Syrian people," Foreign Minister Walid al-Moualem said during a televised news conference in Damascus. "I advise them that if this is their thinking, they shouldn't come to the talks."

"They must abandon these delusions."

Syria's main opposition group said it would attend the peace talks in Geneva on Monday but accused the government of President Bashar al-Assad of preparing to escalate the war to strengthen its negotiating position.

Speaking after breakfast with Saudi foreign minister Adelal-Jubeir, Mr Kerry said Russian and American monitors were to meet in Amman and Geneva today to try to further reduce violence in Syria, and that he planned to request a call with his Russian counterpart Sergei Lavrov.

The United States and Saudi Arabia are two of the chief sponsors of opposition forces in the five-year-old civil war, and will be key to getting them to the table.

Asked if the talks can go ahead as planned despite ceasefire violations, Mr Kerry said: "Yes, it can."

"Our teams are meeting today with Russia in both Geneva and Amman, where very detailed lay downs will take place regarding these allegations, and I am requesting a call with Foreign Minister Lavrov today and we will work through these and we have been each day," he added.

Mr Kerry, who flew to Saudi Arabia yesterday for talks with King Salman and other senior officials, said the level of violence "by all accounts has been reduced by 80 to 90 percent, which is very, very significant. And what we want to do is continue to work to reduce these."

"But we've made it very very clear that the Assad regime cannot use this process as a way to exploit the situation, when others are trying in good faith to abide by it. And there is a limit to the patience with respect to that," he added.

Mr Kerry also said that a US meeting with the foreign ministers of the six-member Gulf Cooperation Council (GCC) would take place at some point in next few weeks in the region, but gave no date or precise venue.

Both Mr Kerry and Mr Jubeir said that all present had agreed to push hard on the Syria talks, for a return to UN-sponsored peace talks to try to end the war in Yemen, and to develop plans to help Libya overcome its crisis.

Meanwhile, up to 20 people took part in a solidarity demonstration outside the GPO today to mark the fifth anniversary since the outbreak of the Syrian civil war. 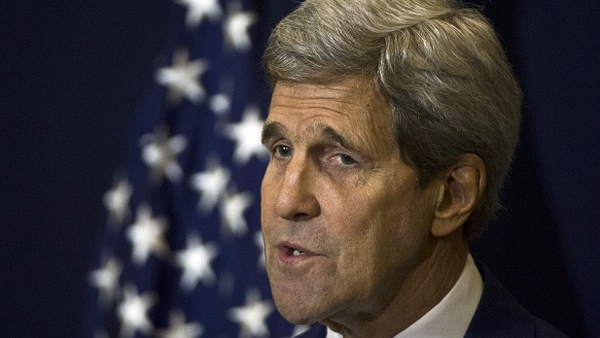