He also beat the former Secretary of State in the first leg of the Democrats Abroad primary held in Dublin on Tuesday. Registered Democratic voters can also vote in this primary by post or by email.

'Democrats Abroad' is a constituency treated like a State for the purposes of allowing US citizens abroad to vote in the US primary elections.

Stateside, Ms Clinton and Mr Sanders hit the campaign trail in the Midwest today as nominating contests got underway in Kansas, Louisiana and Nebraska.

Ms Clinton, who is seeking to strengthen her lead over Mr Sanders, met with African-American clergy members in Michigan, and said that as president she would seek to continue Barack Obama's legacy.

"I want to build on the progress President Obama has made. I am absolutely in his corner. I don't think he gets the credit he deserves when he was handed the worst financial crisis since the Great Depression," she said.

Polls show Ms Clinton with a big lead in Louisiana, which has a large bloc of African-American voters who helped her roll up victories across the South on Super Tuesday.

But the caucuses in less diverse Kansas and Nebraska could be more suited to Mr Sanders. The three states have a total of 109 delegates at stake.

Speaking to supporters in Ohio, Mr Sanders emphasised his differences with Ms Clinton on the issue of trade.

Mr Sanders said that unlike Ms Clinton, he had opposed free trade agreements that he said were responsible for the loss of jobs in the Midwest.

"And if elected president let me tell you what we're going to do. We're going to make a radical change in our trade policy. Corporations in this country are going to start investing in Ohio, in Michigan, in Vermont, in the United States - not just in China and in Mexico," he said.

Ms Clinton has opened up a big delegate lead and Mr Sanders might have a tough time making up the difference.

All states in the Democratic race award their delegates proportionally, meaning Ms Clinton can keep piling up delegates even in states she loses.

On the Republican side Donald Trump, the brash New York billionaire who has opened a substantial lead in delegates over presidential rivals, hopes to rack up more wins in Republican contests in Kansas, Kentucky, Louisiana and Maine. 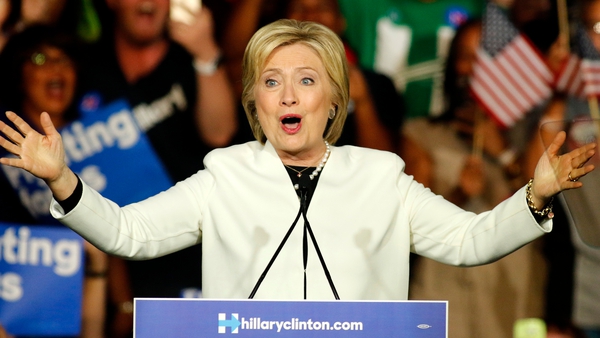