Businessman Donald Trump inched closer to the US Republican presidential nomination after easily outdistancing his rivals in the Nevada caucuses, giving him his third win in four early nominating contests.

Broadcast networks called the state for Mr Trump almost immediately after voting ended, with the state Republican Party confirming the victory soon after.

Mr Trump's decisive win is likely to further frustrate Republican establishment figures who, less than a month ago, were hoping that the outspoken billionaire's insurgent candidacy was stalled after he lost the opening nominating contest in Iowa to Ted Cruz.

But since then, Mr Trump has tallied wins in New Hampshire, South Carolina, and now Nevada, with a suite of southern states ahead on 1 March, so-called Super Tuesday. The real estate mogul had been all but certain to triumph in Nevada, with the big question being which candidate would come in second.

With returns still being tabulated, US Senator Marco Rubio of Florida was in second place, with Mr Cruz, a US Senator from Texas, coming in third.

Retired neurosurgeon Ben Carson and Ohio Governor John Kasich, neither of whom had spent much time campaigning in Nevada, lagged behind with single-digit support in early returns.

Although the caucus in Nevada is not expected to have a significant impact on the overall race - only 30 delegates or slightly more than 1% of the total are up for grabs - it was the first contest for the Republicans in the US west.

It is also the first test of Republican voter sentiment after Jeb Bush pulled out of the race last week following a poor showing in South Carolina.

And candidates here faced the most diverse electorate thus far in the race, more representative of the US population as a whole. 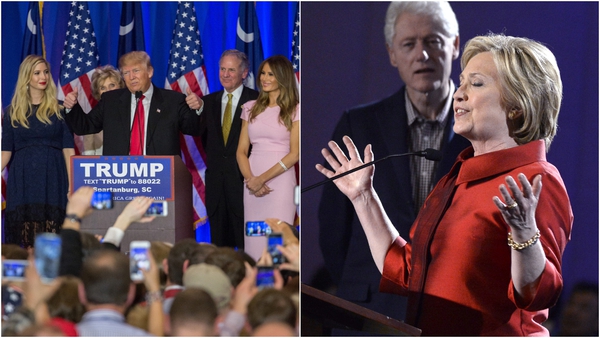 Victories for Trump and Clinton, Bush drops out