A group of Travellers that were parked at the entrance to Galway City Hall have now moved to a local authority car park at Ballyloughane Beach.

The nine Traveller families had been given a legal warning to vacate the area by Galway City Council yesterday.

Galway City Council had said it would seek a court order to force the families to move from outside its administrative building, if they did not do so voluntarily.

This afternoon, the families moved to the car park at Ballyloughane Beach.

The families will meet with the chief executive and senior staff of the city council tomorrow.

Nine families, made up of 18 adults and 15 children, had moved their vehicles and caravans onto the City Hall site after they were told to vacate lands at Galway Airport.

Last month they were evicted from private property, belonging to Barna Waste, where they had been living.

From there, they moved to a site in Knocknacarra, from which they were also evicted.

They then spent one night in Galway Airport before gardaí moved them on, and from there they moved to the City Hall car park.

The council said the families have been offered homeless services and that they were creating a health and safety risk for those entering and leaving City Hall.

It said it has limited capacity to deal with the housing problem in the city. With more than 10,000 people on the housing waiting list at present, the local authority said allocations are made on the basis of proportionality and fairness.

It said the demands of the nine families cannot override all other families' rights, including Travellers currently on the housing waiting list. 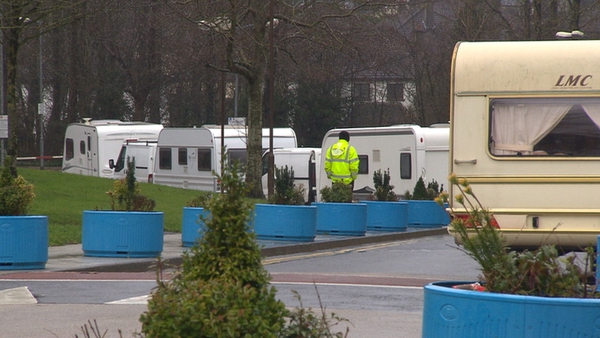