A bomb caused the explosion that ripped a hole in the fuselage of a passenger plane shortly after it took off from Somalia's main airport on Tuesday, killing one person, the government said.

The authorities had initially attributed the blast to sudden air decompression.

The security forces have made several arrests in connection with the attack, Transport and Aviation Minister Ali Ahmed Jama told reporters in the capital Mogadishu.

"Additional investigations conducted by Somali and international experts have confirmed the explosion that occurred inside the Daallo Airlines (jet) was not a technical problem but was a bomb that was intended to destroy the plane and kill all passengers onboard," the minister said.

The blast punched a one-metre hole in the side of the Airbus A321 about 15 minutes after it had taken off from Mogadishu heading for Djibouti.

A passenger identified as Abdulahi Abdisalam was killed, probably after being propelled out of the aircraft in the explosion, investigators said.

Another two out of around 60 passengers on board were slightly injured.

The pilot, a 64-year-old Serb named Vladimir Vodopivec, told a friend that he was convinced the blast had been caused by a bomb, according to the Serbian daily Blic.

The explosion did not damage the plane's navigation system, and this is what enabled the pilot to make the emergency landing, the report said.

Video footage taken after the blast showed people having moved to the back of the plane with emergency oxygen masks dangling down as wind rushed around the main cabin, although most passengers appeared fairly calm.

There has been no claim of responsibility yet for the attack.

Daallo Airlines operates out of Djibouti, flying to destinations in the Horn of Africa and the Gulf.

Mogadishu airport is heavily fortified and adjoins the capital's main base of the African Union mission to Somalia, the 22,000-strong force backing the government in the battle against Al-Qaeda-affiliated Shebab insurgents.

The insurgents have lost ground since being routed from Mogadishu in 2011 but continue to stage regular shooting and suicide attacks.

Today, Somali soldiers backed by African Union troops recaptured the key port of Merka from the Shebab, just one day after the Islamists swept into the city, the army and residents said. 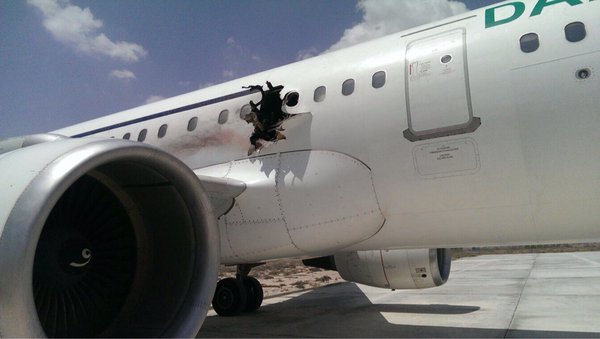