The fatal shooting at a Dublin hotel today was a 'particularly nasty incident', said a senior garda as a major investigation gets under way.

One man was shot dead while two others were seriously injured in the attack this afternoon.

The shooting took place at 2.30pm at the Regency Hotel on the Swords Road during a weigh-in for tomorrow's now-cancelled WBO European Lightweight title fight between Jamie Kavanagh v Antonio Jao Bento.

Gardaí believe that at least four people were involved in the incident. Two were described at wearing police-style uniforms similar to a SWAT team uniform, including metal helmets. The men were armed with automatic weapons. Two others were carrying hand guns.

In a press conference this evening, Chief Superintendent Barry O'Brien said: "One [of the attackers] is described as possible being a male disguised as a female wearing what was described as a blonde or auburn wig."

The fourth suspect was a middle-aged man, of stocky build, wearing dark clothing and a light-coloured cap.

Chief Supt O'Brien said the Assistant State Pathologist has visited the scene and will carry out a post-mortem examination on the deceased tomorrow morning.

"This is a particularly nasty incident," said Chief Supt O'Brien.

A short time after the incident a van was found burnt out at the Charlemont Estate in Marino.

Detectives are trying to establish a motive for the murder but one line of inquiry is that it could be connected to the murder of Gary Hutch, who was shot dead in Spain last September. 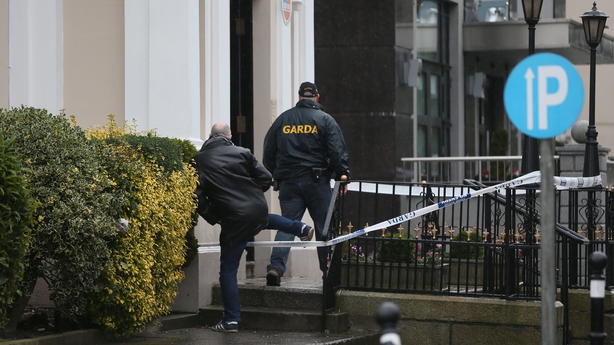 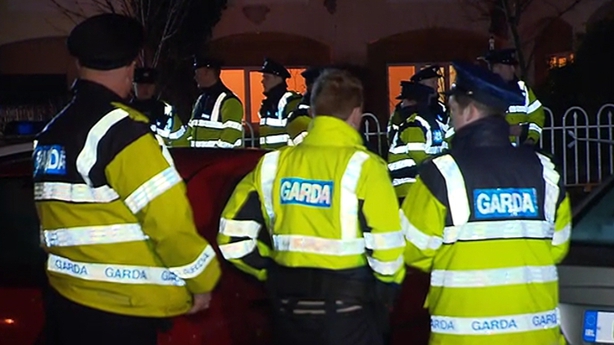 It is believed he was murdered by a drugs cartel led by an Irishman based in Spain and that today's shooting could be in retaliation for that killing.

The two other men injured in the shooting were taken to the Mater and Beaumont hospitals.

It is understood that the men were aged in their 20s and 30s.

The scene has been sealed off for a technical examination of the area.

Boxers were weighing in ahead of tomorrow's 'Clash of the Clans' bout at the city's National Stadium.

Fighters on the bill include Dublin boxer Jamie Kavanagh, who was scheduled to fight for the WBO European lightweight title against Portuguese Antonio Joao Bento.

BBC reporter 'looked down barrel of the gun'

He said he was in the lobby at the time, having made his way out of the function room.

He said one of the gunmen shot a man, who was running across the middle of the lobby in the lower leg, saying "he was approximately six feet from me".

He said the man was fatally wounded.

Mr McAnena said: "At that point I jumped over the receptionist's desk and got on the ground and I started shouting 'don't shoot, don't shoot' and I think I actually said 'I'm innocent'.

“At that point, the gunman leaned over the reception desk, looked down at me - pointing the gun at me - and he said something to me, I can't recall now, and left.

"I was looking down the barrel of the gun and at this point I think I am going to die.

“I never knew the meaning of the word terrified until this afternoon."

He said he did not hear any more gunfire after that.

Mr McAnena said he stayed in a room behind the reception desk with the receptionist for an hour. He then rang gardaí who said it was safe to leave the room.

"The whole thing was so surreal. It's hard to make sense of it," he added. 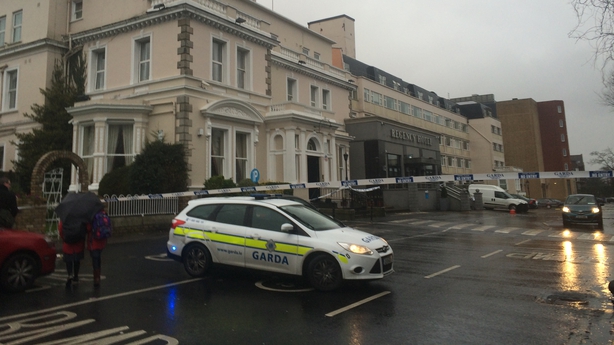 Mel Cristle, the President of the Boxing Union of Ireland, said that the shooting was not indiscriminate and that individuals, not the boxers, were being targeted.

Speaking on RTÉ’s Drivetime, Mr Cristle said that people were diving for cover and he saw the fear in children's eyes, saying "they couldn't believe what was going on".

He said there were approximately 200-300 members of the public at the weigh-in.

Anyone asking I'm OK! Thanks you for asking. I was lucky today is all I can say.....

Box Nation, the television channel scheduled to broadcast the fight, said in a message on Twitter that the show had been cancelled due to the shooting.

"Following today's incident at the Dublin weigh-in, tomorrow's show from the National Stadium has been cancelled," the post said.

The bout was being promoted by Frank Warren and MGM Promotions, according to MGM, a Marbella-based gym run by Birmingham-born Irish boxer Matthew Macklin.

Chief Supt O'Brien said: "We know that there were a considerable number of people present in the Regency Hotel and we are appealing to them to provide any information they may have in relation to the shooting.