The United Nations has announced the formal start of peace talks for Syria and urged world powers to push for a ceasefire.

The announcement comes as government forces, backed by Russian air strikes, launched their biggest offensive north of Aleppo in a year.

Rebels said the offensive was being conducted with massive Russian air support, despite a promise of goodwill steps by theS yrian government to spur peace negotiations.

The opposition has said that without a halt to bombing, the lifting of sieges on towns and freeing of prisoners, it will not participate in talks in Geneva called by the UN.

"We are here for a few days. Just to be clear, only a few days. If there (is) no progress on the ground, we are leaving... We are not here for negotiations, we are here to test the regime's intentions," Monzer Makhous, an official from the Syrian opposition's High Negotiations Committee, told Reuters Television on arrival in Geneva.

The Syrian people deserved to see improvements on the ground and the opposition had a "strong point" in demanding goodwill steps, he said.

World powers, he said, should immediately begin talks on how to enforce a ceasefire: "There was a message ... that when the Geneva talks actually start, in parallel there should be the beginning of a serious discussion about ceasefires."

The Geneva peace talks mark the first attempt in two years to hold negotiations to end a war that has drawn in regional and international powers, killed at least 250,000 people and forced 10 million people from their homes.

Opposition delegates agreed late on Friday to travel to Geneva after saying they had received guarantees to improve the situation on the ground.

However, they says there has been no easing of the conflict, with government and allied forces including Iranian militias pressing offensives across important areas of western Syria, most recently north of Aleppo.

"The (latest) attack started at 2am, with air strikes and missiles," a rebel commander said, describing the situation near Aleppo, once Syria's biggest city and commercial centre, now partly ruined and divided between government and insurgent control.

He told Reuters his Free Syrian Army group had sent reinforcements to an area near the village of Bashkoy.

The British-based Observatory monitoring group said government forces were gaining ground in the area, and had captured most of the village of Duweir al-Zeitun near Bashkoy.

It reported dozens of air strikes this morning.

The fighting has created a new flow of refugees.

A Turkish disaster agency said more than 3,600 Turkmens and Arabs fleeing advancing pro-government forces in northern Latakia province had crossed into Turkey in the past four days.

The death toll from an IS suicide attack near Damascus yesterday also climbed to more than 70 people, the Observatory said. 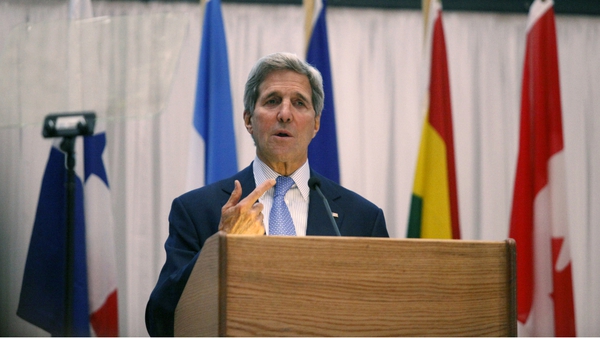 Kerry appeals to both sides in Syria peace talks News