High-tech genome technology has been used by Irish researchers to trace the origin of a Roman-age decapitated body, found in York, back to the Middle East.

During an analysis of seven bodies found in the city, scientists from Trinity College Dublin found one had DNA which indicates he may have come from modern day Palestine, Jordan or Syria, before migrating to Britain where he died.

The discovery reveals that mass migration thousands of years ago may have played a more important role in shaping the genetic blueprint of people from modern day Ireland and Britain than previously thought.

The other six bodies found at the Roman burial site at Driffield Terrace, which were sampled during the research, were found to have a genetic profile more similar to the modern day Welsh.

They were also found to have similar DNA to an earlier Iron Age woman from East Yorkshire. 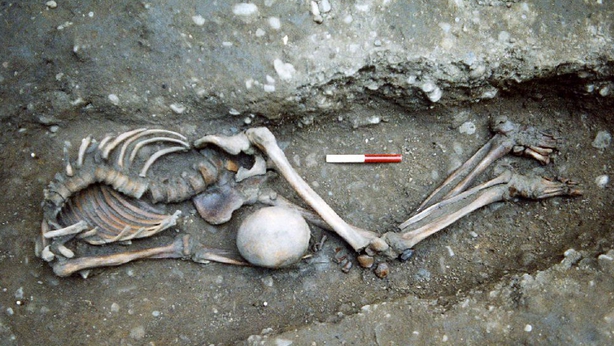 However, the six British Roman's DNA was different to that of a later Anglo-Saxon man whose body was found in a cemetery in Teeside.

His genes were more closely aligned with modern East Anglians and Dutch, highlighting the impact of later migration upon the genetic makeup of the earlier Roman British inhabitants.

The study, carried out in conjunction with researchers from universities in York, Durham, Reading, Sheffield, London and Utrecht, as well as the York Archaeological Trust, aimed to open a window on the genomes of those who lived in the Roman era.

More than 80 skeletons were found at the York site, and the bodies from there were chosen by the team for this whole genome analysis because of its unusual nature.

The site was the most northerly Roman outposts, most of the bodies were decapitated, their age range was under 45, they were mostly males and they showed signed of healed trauma.

This all led archaeologists to think they were either gladiators or soldiers.

The genome sequencing was carried out at Trinity College Dublin, led by Professor Daniel Bradley and post-graduate researcher Rui Martiniano.

The research is published in the journal Nature Communications.