Political parties stepped up their pre-election campaigning with battle lines being drawn around public spending versus tax cuts.

Fianna Fáil leader Michéal Martin said he would prioritise public services over tax cuts if a choice had to be made.

Politicians kicked off a debate on how to spend the €9-10bn that is likely to be available over the next five years to whoever forms the next government with the main question being should there be more for public services or tax cuts?

Mr Martin has insisted that investing in public services, like health, would be the major priority for his party.

"We want to put a choice before the people that a Fianna Fáil-led government will deliver fairness but also deliver better public services," said Mr Martin.

"The Fine Gael-led government of the last five years has led to a decimation of public services," added Mr Martin.

But Fine Gael has insisted its plan to cut taxes will generate revenue.

“We will abolish USC cuts because it’s a bad tax," said Minister for Jobs Richard Bruton.

"It was supposed to be a temporary tax. We do all of these things with a central focus on jobs. We need to build on the 135,000 people we have already back at work, see more people working, more pay packets coming in so we can invest in quality services for the future," he added.

Labour has launched its Standing Up for Working Families campaign.

"We want to put more money in their pockets by reducing USC. Secondly, we want to improve public services and make those services more affordable," said Tánaiste Joan Burton.

Sinn Féin's jobs and enterprise spokesman Peadar Toibin said: "Very simply we believe if you want a European-type public service to deal with the crisis; if you want roads and rail lines and broadband – a European-type infrastructure – well you’ve got to pay a European level of taxation for that." 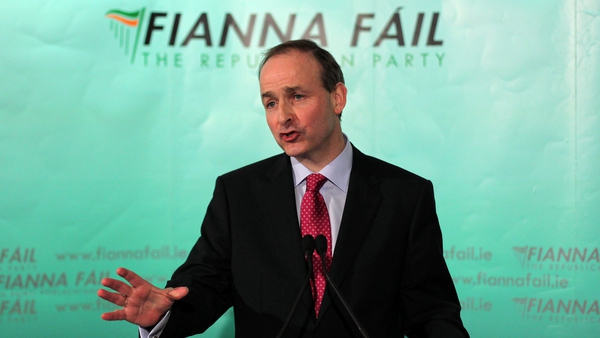 Polls show support for Fianna Fáil on the rise