Indonesian police say they have arrested others linked to Thursday's attack by militants linked to the so-called Islamic State group in the centre of Jakarta.

A Jakarta police spokesman declined to say how many people had been detained or provide any other details about the arrests.

Two civilians - an Indonesian and a Canadaian - were killed in the attack, as well as five attackers.

Meanwhile, in Malaysia a suspected militant has been arrested in a metro station in Kuala Lumpur.

The country’s police chief said the man had confessed to planning a suicide atttack in the country.

The 28-year-old was arrested with weapons and documents related to IS, police said.

Malaysia has been on high alert since Thursday’s bomb and gun attacks in neighbouring Indonesia's.

In a statement, the police chief said the suspect confessed to planning a suicide attack in Malaysia after receiving orders from a foreign IS member in Syria.

No other details were immediately available.

He said three other people suspected of being supporters of IS were also arrested between 11 and 15 January.

The three were arrested at Kuala Lumpur international airport after they returned from Turkey, where they were detained for trying to make their way into Syria. 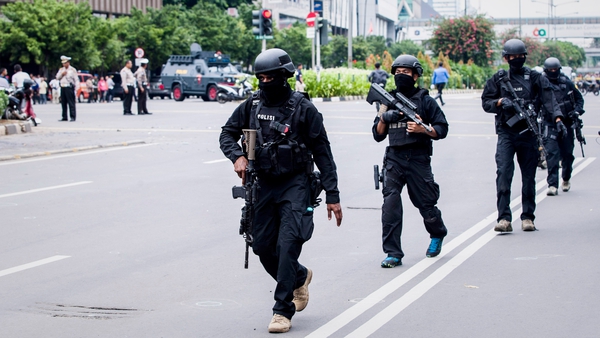