The attackers who killed 129 people in last night's wave of shootings and suicide bombings in Paris appeared to be made up of three teams, Paris prosecutor Francois Molins has said.

Mr Molins said that French authorities had a security file on one of the concert hall attackers and said that seven "terrorists" were killed in the attacks, the prosecutor said.

The death toll of 129 victims will rise further, he added.

French President Francois Hollande promised a "merciless" response to the wave of attacks by gunmen and bombers that killed dozens of people across Paris, describing the assault claimed by the so-called Islamic State as an act of war against France.

A Paris city hall official said four gunmen killed at least 87 young people at a rock concert at the Bataclan concert hall before anti-terrorist commandos launched an assault on the building.

Dozens of survivors were rescued, and bodies were still being recovered this morning.

Some 40 more people were killed in five other attacks in the Paris region, the official said, including an apparent double suicide bombing outside the Stade de France national stadium.

129 people were killed. A further 352 were injured, with 99 in a critical state as of last night.

Mr Hollande and the German foreign minister were at the Stade de France watching a friendly soccer international.

The assaults came as France, a founder member of the US-led coalition waging air strikes against Islamic State in Syria and Iraq, was on high alert for terrorist attacks.

It is the worst such attack in Europe since the Madrid train bombings of 2004, in which 191 died.

Mr Hollande said the attacks had been organised from abroad by Islamic State, with internal help.

Sources close to the investigation said one of the dead gunmen was French with ties to Islamist militants.

Syrian and Egyptian passports were found near the bodies of two of the suicide bombers.

A man arrested in Germany in early November after guns and explosives were found in his car may be linked to the attacks in Paris, Bavaria's state premier said, without giving details.

"Faced with war, the country must take appropriate action," Mr Hollande said after an emergency meeting of security chiefs.

"France will be merciless towards these barbarians from Daesh," he said, using an Arab acronym for Islamic State.

During a visit to Vienna, US Secretary of State John Kerry said: "We are witnessing a kind of medieval and modern fascism at the same time.”

In its claim of responsibility, IS said the attacks were a response to France's campaign against its fighters.

As it happened: the attacks in Paris

It also distributed an undated video in which a militant said France would not live peacefully as long it took part in US-led bombing raids against them.

"As long as you keep bombing you will not live in peace. You will even fear travelling to the market," said a bearded Arabic-speaking militant, flanked by other fighters.

Six attackers blew themselves up and one was shot by police. There may have been an eighth attacker, but this was not confirmed.

The attacks, in which automatic weapons and explosives belts were used, lasted 40 minutes.

"The terrorists, the murderers, raked several cafe terraces with machine-gun fire before entering (the concert hall). 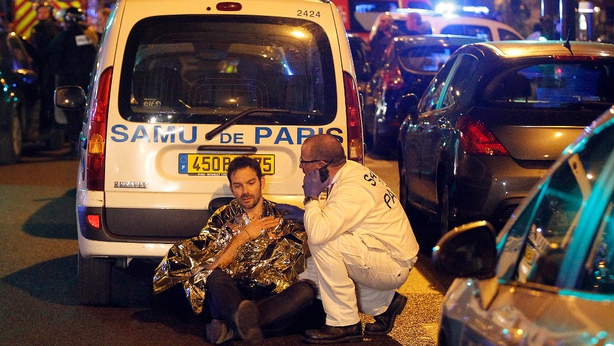 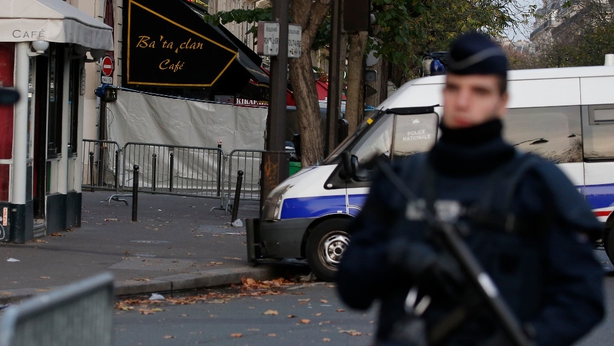 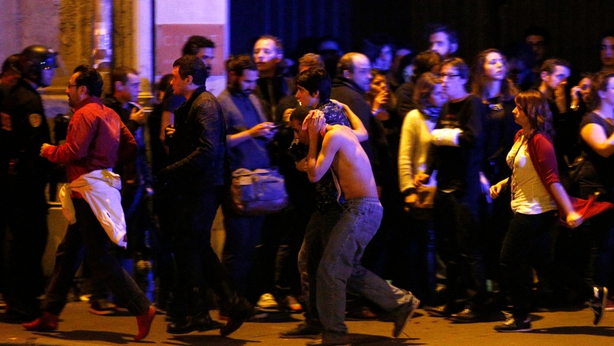 After being whisked from the stadium near the blasts, Mr Hollande declared a national state of emergency, the first since World War Two.

Local sports events were suspended, department stores closed, U2 cancelled a concert for today, and schools, universities and municipal buildings were ordered to stay shut.

French newspapers spoke of "carnage" and "horror". Le Figaro's headline said: "War in the heart of Paris" on a black background with a picture of people on stretchers.

Emergency services were mobilised, police leave was cancelled, 1,500 army reinforcements were drafted into the Paris region and hospitals recalled staff to cope with the casualties.

Radio stations warned Parisians to stay at home and urged residents to give shelter to anyone caught out in the street.

The deadliest attack was on the Bataclan, a popular concert venue where the Californian rock group Eagles of Death Metal was performing.

Some witnesses in the hall said they heard the gunmen shout Islamic chants and slogans condemning France's role in Syria.

In Pictures: France in mourning

'This is more than Charlie'

Attacks latest in string of incidents in France 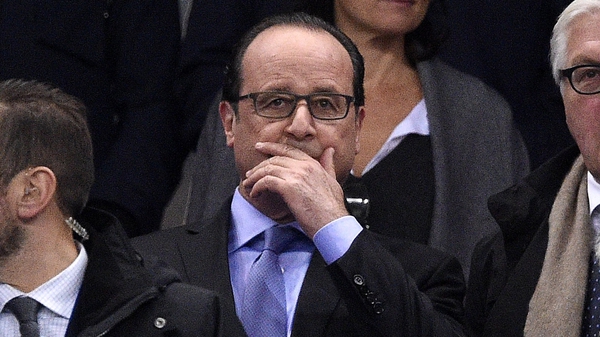