A team of Irish aviation officials is expected to travel to Egypt tomorrow and assist with the investigation into the Russian plane that crashed in Egypt's Sinai Peninsula yesterday, killing all 224 people on board.

The A321 aircraft is registered in Ireland through a leasing company, but was operated by a Russian airline under the brand name Metrojet.

The aircraft was carrying tourists from the Red Sea resort of Sharm el-Sheikh to St Petersburg when it went down soon after daybreak on Saturday.

Two inspectors from the Air Accident Investigation Unit (AAIU) and an expert from the Irish Aviation Authority will travel to Cairo tomorrow.

AAIU Chief Inspector Jurgen Whyte told RTÉ News the team would "provide whatever assistance" it can to the Egyptian authorities, who are leading the investigation.

"Because the aircraft is registered in Ireland, there will be certain documentation we will have to provide and they may have certain questions related to the registration of the aircraft," Mr Whyte said.

"We can also provide expertise in that one of the engineers who is travelling is an Airbus-qualified engineer."

"We have a pilot travelling who will have operational experience," he added.

The Irish team will be joined by officials from Egypt, Russia as well as Germany and France.

Mr Whyte added: "The investigation itself could take several months but the hope is the initial indications will come following the readings of the flight recorders, which should be done in the next two or three days." 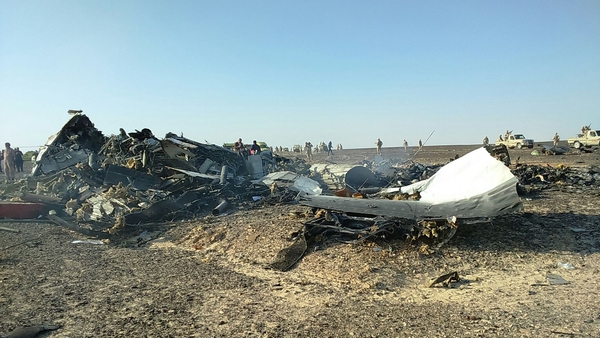 Russian airliner 'broke up in air' over Sinai