Palestinian men armed with knives and a gun killed at least three people and wounded several others in a string of attacks in Jerusalem and near Tel Aviv on Tuesday, police said, on a "day of rage" declared by Palestinian groups.

With the worst unrest in years in Israel and the Palestinian territories showing no sign of abating, Prime Minister Benjamin Netanyahu convened an emergency meeting of his security cabinet to discuss what police said would be new operational plans.

Officials said Israel's public security minister was considering whether to seal off Palestinian neighbourhoods in East Jerusalem, home of many of the assailants of the past two weeks, from the rest of the city.

Unlike their brethren in the occupied West Bank,Palestinians in East Jerusalem can travel in Israel without restrictions. Israel annexed East Jerusalem after a 1967 war in a move that is not recognised internationally.

In Jerusalem, two Palestinians shot and stabbed passengers on a bus, killing two and injuring four, police said. One of the assailants was killed, an ambulance service spokesman said, and the other captured.

Minutes later, a Palestinian rammed his car into a bus stop in an ultra-Orthodox Jewish neighbourhood of the city, police said. A surveillance video showed him getting out and hacking at pedestrians with a cleaver until he was shot dead by a passer-by.

One of the Israelis he had attacked died and six others were wounded, police said.

In all, seven Israelis and 28 Palestinians, including 10 alleged attackers and eight children, have died in almost two weeks of street attacks and security crackdowns. 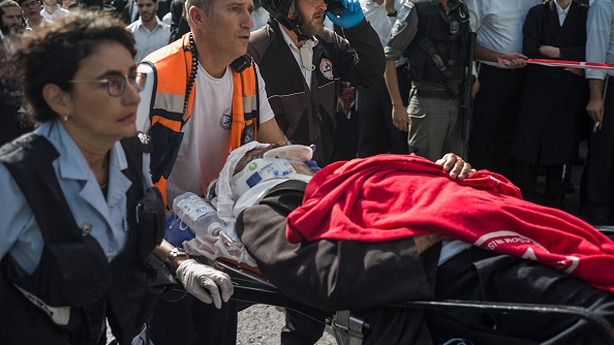 The violence has been stirred in part by Muslim anger over increasing Jewish visits to the al-Aqsa mosque compound in Jerusalem, Islam's holiest site outside the Arabian Peninsula.

With Israel's Jewish population increasingly afraid for its safety, merchants reported that canisters of pepper spray for self-defence were selling out.

"We don't know what to do, or where to walk," Avi Shemesh, a witness to the first attack, told reporters. "They are Israel-haters and they need to be eliminated."

In Raanana, just north of Tel Aviv, a Palestinian man stabbed and lightly wounded an Israeli on a shopping street during the morning rush hour, officials and witnesses said.

Amateur video distributed by police showed several men kicking and beating the alleged assailant as he lay on the ground. The ambulance service said he had been seriously hurt.

A shopkeeper said that, after hearing shouting, he had grabbed a heavy wooden umbrella and run outside to confront the assailant.

"He started stabbing the guy. I hit him a couple of times and kicked him and the knife flew out of his hand," the storeowner said. "I wish I had had a gun - I would have shot him."

Within an hour, another Palestinian stabbed and wounded four people in Raanana, police said.

And in the parking lot of an Ikea furniture store in northern Israel, a Jewish man, who police said had intended to carry out a revenge attack, stabbed and wounded a fellow Jew,mistaking him for an Arab.

The main Palestinian factions, including the Western-backed Fatah movement and the militant Hamas group, had declared Tuesday a "day of rage" across the West Bank, Gaza and East Jerusalem, accusing Israel of "escalating its crimes against our people".

The leaders of Israel's Arab community called for a commercial strike in their towns and villages.

The now-daily stabbings have raised speculation that Palestinians could be embarking on another uprising or intifada,reflecting a new generation's frustrations over their veteran leadership's failure to achieve statehood.

But in Geneva, where the Palestinians' flag was raised at U.N. headquarters for the first time on Tuesday after their promotion to "non-member observer state", Palestinian Foreign Minister Riad al-Malki said he did not expect a new uprising.

He said Netanyahu - who has accused Palestinian leaders of inciting violence - was seeking confrontation.

"He knows this is the only way how he is going to continue killing innocent people: by claiming there is an intifada and the Israelis are trying to defend themselves," Malki said.

The Palestinian Authority has echoed allegations swirling around Arabic social media that some of the Palestinians killed by police in the recent violence have in effect been summarily executed.

Palestinians also see increasing visits over the past year by Jewish groups and right-wing lawmakers to the al-Aqsa plaza,revered by Jews as the site of two destroyed biblical temples and Judaism's holiest place, as eroding Muslim religious control of the compound.

Netanyahu has said repeatedly that he will not allow any change to the status quo under which Jews are allowed to visit the site but non-Muslim prayer is banned, but his assurances have done little to quell alarm among Muslims across the region.

"Naturally, we mourn the loss of any life, no matter who it is, but this violence and any incitement to violence has got to stop," he warned.

"We continue to stress the importance of all -- all -- persons of responsibility to condemn the violence on either side, and to avoid provocative statements.

"I continue to urge all sides to take affirmative steps to restore calm and I will stay in very close touch with leaders in the region in the days ahead" he said.