Details have emerged of the final communications by a pilot who died in an air crash in Waterford last month.

Howard Cox from Devon died after his single seater plane crashed on 25 July between Waterford airport and Dungarvan.

He was en route in his BD5 plane – a type of homebuilt mini-jet immortalised in the opening sequences of the James Bond film 'Octopussy' -  to Shannon to take part in the Foynes Air Show the following day.

A preliminary report by the Air Accident Investigation Unit found that Mr Cox made a mayday call to air traffic control at Shannon moments before the plane crashed saying the engine was on fire.

Air Traffic Control asked him was he going to go back to Waterford airport, but he responded that he was losing height and was going to have to find a field in which to land.

A few seconds later he was asked how many people were on board to which he responded one person on board.

His final transmission was difficult to understand but did contain the phrase "ending up in a field".

Investigators say Mr Cox's voice was composed and professional during these transmissions.

Half a minute later, another aircraft which was flying nearby reported seeing smoke ahead of him in a field near Clonea beach.

It appears there was a significant fire after the plane hit the ground and that the left wing had separated when hitting a hedge as Mr Cox tried to land.

Plumes of black smoke were reported by witnesses and black soot was evident throughout the wreckage trail.

In the crash landing the jet's left wing clipped a tree on the boundary of a field before the entire wing broke off and the plane then hit a hedgerow and the ground.

It burst into flames on impact.

Wreckage examination is continuing at the AAIU hangar, the report said. 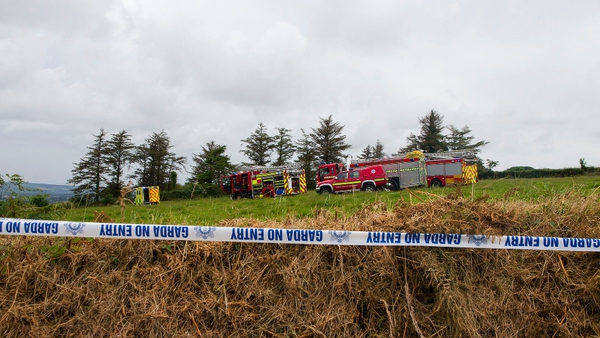