Far-left rebels in Greece's Syriza party have broken away to form a new party with 25 politicians, a parliament deputy speaker announced today.

The new party is called Popular Unity and is headed by former Energy Minister Panagiotis Lafazanis.

It will seek a mandate to form a government as the third-biggest group in the 300-seat parliament.

The group has defied outgoing Prime Minister Alexis Tsipras's call to back a third bailout programme.

Under Greece's constitution, the three biggest parties in parliament are given a three-day mandate to form a government after Mr Tsipras' resignation.

The New Democracy party currently has the mandate, which would pass to the next group if it was unsuccessful in its effort.

"We will take the mandate and we will utilize it," said Popular Unity MP Dimitris Stratoulis.

ToPotami and Golden Dawn each have 17 politicians.

However, the country appears almost certain to be heading to an election next month

Mr Tsipras quit yesterday, hoping to strengthen his hold on power in a snap election, after seven months in office, in which he fought Greece's creditors for a better bailout deal but had to cave in.

"Elections surely have an indirect cost ... but will clear things up so we can move ahead," he told the state TV channel ERT.

"There are political forces which consider the bailout a salvation. Syriza was forced to make this political choice but not because of ideology."

President Prokopis Pavlopoulos had already invited conservative leader Vangelis Meimarakis by email to try to form a new government without the need for a new election, which would be the third in as many years.

He formally received the mandate this morning.

But his New Democracy Party has just 76 members, and is almost certain to fail to find enough partners among an opposition that ranges from the KKE communists to the ultra-right Golden Dawn party.

If Mr Meimarakis has no coalition agreement within three days, the constitution says the next biggest party should be given a chance, but an election is a virtual certainty.

Faced with a near collapse of the Greek financial system which threatened the country's future in the euro, Mr Tsipras was forced to accept the creditors' demands for yet more austerity and economic reform.

He had promised to scrap these policies when he was elected in January.

Announcing his resignation, Mr Tsipras acknowledged his record had been patchy. "I want to be honest with you.

"We did not achieve the agreement we expected before the January elections,"he told the Greek people.

"I feel the deep ethical and political responsibility to put to your judgment all I have done,successes and failures."

Meanwhile, the Greek Minister for Labour said his government has called elections now in order to reconfirm the support of the people.

Speaking on RTÉ's Morning Ireland, George Katrougalos said elections are necessary now because the party's original mandate promised a better deal than the one they signed up to.

He said the timing had nothing to do with the fact that the Greek people had not yet experienced the austerity measures contained in their latest bailout agreement.

"The Greek electorate knows the content of the agreement and they must reconfirm their support to us. Because it is true that the past elections of January, we promised a better agreement than we have managed to reach. It is true that we have done our best but we were facing a very hostile balance of forces."

It said the election was necessary in order to be able to properly implement the new bailout agreement. 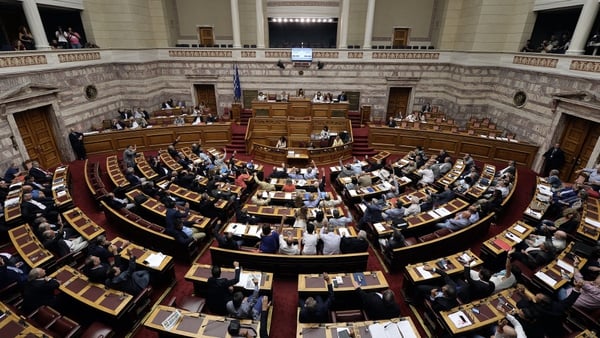