A swimmer reportedly needed tetanus shots after being attacked by a seagull in the sea at Fenit in Co Kerry last week.

The attack took place last Tuesday afternoon, around 70m off the shoreline.

The gull swooped on the man, believed to be a visitor to the area, and returned a second time, even though the swimmer was trying to resist the bird.

The man beat the gull away, but it drew blood from his hand.

Lifeguards directed him to the emergency department at Kerry General Hospital, where he is understood to have received tetanus shots.

Brendan O'Connor, Water Safety Officer with Kerry County Council, said that in his 40 years of beach and coastal activities this is the first such attack ever reported by lifeguards in Kerry.

The county has 684km of coastline, one of the longest stretches in the country.

Mr O'Connor believes it is part of a pattern of unusual behaviour by gulls.

The gull in question was a great black-backed gull, he said.

"He broke skin - pecked him - and came back for another bite," the officer said.

The swimmer was simply swimming and was not doing anything unusual "when the gull swooped on him", he added.

32 lifeguards are employed by the council along Kerry's blue flag beaches, which stretch from Derrynane to Ballybunion.

The swimmer, who was near the buoys off Fenit beach, a traditional target for long distance and strong swimmers, tried to summon the attention of the two lifeguards while attempting to beat away the gull.

"This is the first time I have ever heard of such an attack by a gull on a swimmer," Mr O'Connor said.

The attack is the latest in a number of extraordinary reports of aggressive behaviour by seagulls in Kerry this year including the killing of two mountain ewes near Lispole in west Kerry and an attack on a motorcyclist in south Kerry.

Micheál O'Coileain, Environmental Officer with the council, said the fact that there are no landfill sites now in Kerry, or indeed in the whole region, may be a factor in the gulls' strange behaviour, including the movement further and further inland.

Traditionally gulls would have fed on the landfills.

In a sign that they are moving further and further inland in Kerry, gulls are now common on the Killarney lakes. 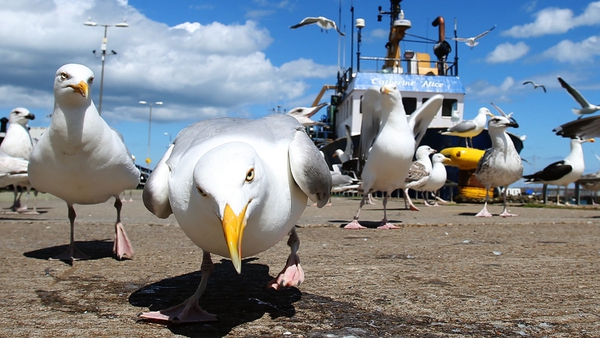