Several beaches on the east coast of Australia have been closed after fresh shark sightings as authorities warned swimmers to be vigilant following an attack that left a surfer with serious arm and leg injuries.

Beaches at the tourist hub of Ballina, where a bodyboarder was severely injured by a shark last month and a Japanese surfer was killed in February, stayed closed after sightings this weekend, Surf Life Saving New South Wales said.

"There were a couple of sightings yesterday of quite large sharks so they closed the (beaches)," a Surf Life Saving NSW spokeswoman told AFP of the Ballina region, a popular spot some 740km north of Sydney.

"Our volunteers... went out this morning and saw another large shark near Lighthouse Beach."

Beaches near Evans Head where a 52-year-old surfer was bitten on Friday were reopened but NSW state police advised those entering the water to "remain vigilant".

The surfer, named in local media as Craig Ison, punched a shark after being attacked about 100m offshore at Evans Head just south of Ballina.

He suffered bite wounds to his legs and hands and has since undergone surgery in hospital.

Authorities said the presence of baitfish was attracting sharks to Ballina and nearby areas.

"The jet rescue boat crew reported that there were lots and lots of baitfish schools around the area this morning, so it was fairly logical that they would then spot a shark there as well, and that's what happened," the Surf Life Saving NSW spokeswoman said.

The beach closures come just over a week after a scallop diver was killed by a shark off Maria Island in the southern state of Tasmania as his daughter watched. 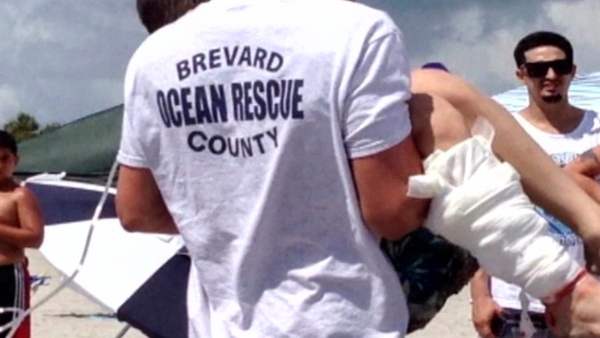