A baby girl has been born on board an Irish naval vessel involved in the humanitarian rescue operation in the Mediterranean.

The baby, named Destiny, was born after her mother, Grace, went into labour four weeks early while on board LÉ Niamh.

Grace went into labour at 4.43pm yesterday afternoon and baby Destiny was delivered by medics Paul O'Connell and Conor Kilbride at 5.46pm.

Mother and baby were later transferred to an Italian Coast Guard vessel and brought to Sicily for post-natal care.

The woman was one of 114 people - including 14 pregnant women - who were transferred from MV Dignity, a Médecins Sans Frontiéres vessel, which is also deployed in the Mediterranean humanitarian operation, for transfer to port.

All of the pregnant women were medically assessed on board the vessel.

Commander Ken Minihan said once it was discovered that Grace was in labour, training kicked in and the baby was delivered safely.

Speaking on RTÉ's Morning Ireland, he said mother and baby were in good health when they were taken off LÉ Niamh yesterday for hospital care.

Grace, who is from Nigeria, was happy with the assistance she got on board and was treated very well, he said.

Commander Ken Minihan talks about the baby who was delivered on board the Irish naval vessel LÉ Niamh yesterday https://t.co/yIv1MHkDNG

On Monday, LÉ Niamh rescued 256 migrants – 235 men, 13 women and eight minors – from a wooden barge northeast of Tripoli, before it rendezvoused with MV Dignity to transfer the 62 women, 45 men and seven children that were on board.

The naval vessel left Ireland on 10 July and has a crew of 57 including two Army medics. 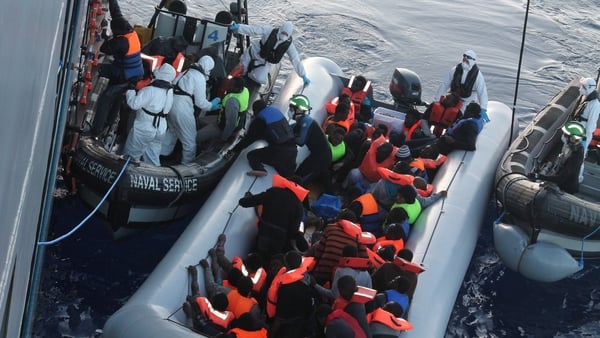