NASA has released the first high quality images of Pluto and two of its five moons, captured during the flyby of the dwarf-planet by the New Horizons probe yesterday.

A black and white image of a portion of Pluto shows a mountainous surface which mission scientists say looks like it is very young, as there is no evidence of impact craters on it.

The New Horizons team says Pluto appears to have been reshaped by geological processes, could still even have active geysers and volcanoes, and may be covered in water ice.

The mission team also announced that it has informally named the region on Pluto which is shaped like a heart Tombaugh Regio after the man who discovered it, Clyde Tombaugh. 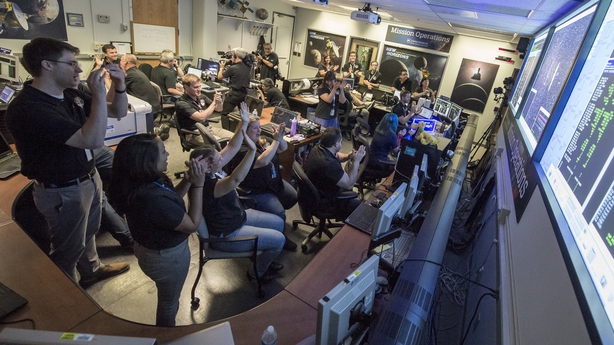 Another image of the moon Hydra shows an elongated cashew nut shaped object, which scientists say  measures around 28x19 miles.

While a new image of Pluto's largest moon, Charon, shows a surface with deep canyons which may be 4-6 miles in depth, as well as troughs and cliffs.

It also has a dark area near its polar cap which scientists think could be a thin veneer.

The images and data are just the first results to be returned by the probe which travelled for nine years to reach Pluto five billion kilometres away.

The spacecraft will continue to downlink the data it gathered yesterday slowly over the next 16 months.

Because of the distance, it takes 4.5 hours for signals to get from the probe to Earth.

Professor Stephen Hawking and US president Barack Obama have hailed the scientists behind the probe, which completed the closest encounter with the dwarf planet ever achieved.

Mr Obama said on Twitter: "Pluto just had its first visitor! Thanks Nasa - it's a great day for discovery and American leadership."

Prof Hawking said on Facebook: "I would like to congratulate the New Horizons team and Nasa (National Aeronautics and Space Administration) for their historic fly-by of Pluto. The culmination of a decade long mission, I can't wait to see what new information the New Horizons spacecraft will reveal about our distant relative."

Earlier Nasa posted a stunning new image on Instagram, taken by New Horizons from a distance of 476,000 miles.

It clearly shows the Pluto's surprising Mars-like reddish hue, and the enigmatic heart-shaped feature on its surface that has already become Pluto's calling card on the internet.

You ain't seen nothing yet! Tomorrow, @NASANewHorizons #PlutoFlyby images will have even greater detail. Stay tuned! https://t.co/t7HjayxYR0

New Horizons has taken more than nine years to reach Pluto, carrying with it the ashes of the astronomer who discovered the remote icy object in 1930.

When the mission was launched in January 2006, the aim was to reach the outermost of the Sun's family of nine planets. Seven months into the probe's epic journey, international astronomers downgraded Pluto's status to "dwarf planet".

But despite its small size - just over two-thirds the diameter of the Earth's moon - Pluto looks and behaves like a fully fledged planet, having an atmosphere and no less than five moons of its own. 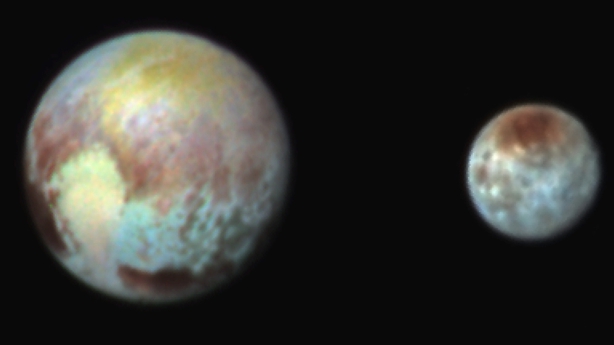 Currently, Pluto is just under five billion kilometres from Earth, one of a number of distant "worldlets" in a region known as the Kuiper Belt.

It is so far away that its light takes more than four hours to reach the Earth, making communication with New Horizons an exercise in patience.

The $720 million probe is the size of a baby grand piano and, after launching on January 19 2006, it reached an Earth-relative velocity of 14km/s, making it the fastest space vehicle in history.