The Dáil has voted to approve the terms of reference of the new Commission of Investigation into certain transactions at IBRC.

The terms were approved, with 119 TDs voting in favour and 20TDs voting against.

Earlier, Minister for Finance Michael Noonan told the Dáil retired High Court judge Daniel O'Keeffe has agreed to serve as the Chairperson of the new Commission of Investigation into IBRC transactions.

He said Judge O'Keeffe has a strong commercial background, is a chartered accountant and is a former chair of the Irish Takeover Panel.

He named the retired judge as he concluded the two-day debate on the terms of reference.

Mr Noonan said the Commission will have the power to investigate any transaction that gives rise to concern no matter what the scale of the loss is.

He said: "It is not my intention, or that of the Government, to cut off a potential line of investigation."

Earlier, Mr Noonan told Fianna Fáil's finance spokesman that IBRC's Special Liquidators were aware of only two instances where alleged verbal commitments with commercial borrowers were made by the previous management of the bank.

Mr Noonan made his comments in a written reply to a Dáil question from Michael McGrath.

He said that given the fact that this information is commercially sensitive, the liquidators are "not in a position to provide further information regarding these situations".

The development follows allegations made in the Dáil by Sinn Fein's finance spokesman Pearse Doherty, where he stated that Denis O'Brien had a verbal agreement with the former IBRC management to extend his loans.

Mr Noonan also said he was informed that all dealings with IBRC customers, whether they were restructures or amendments to loans, were dealt with by the respective relationship management team in the bank.

In accordance with the bank's policies, issues such as any changes of interest rate on loans would be expected to be brought to the Credit Committee for approval, the Minister added.

Meanwhile, Minister for Jobs, Enterprise and Innovation Richard Bruton has said the Attorney General has confirmed that the allegations made yesterday by Pearse Doherty will be included in the terms of reference for the Commission of Investigation into IBRC transactions.

Mr Doherty told the Dáil that businessman Denis O'Brien had a €315m IBRC loan extended on the basis of an apparent verbal agreement, despite it having been earlier repeatedly rejected by the bank's group credit committee.

The Opposition today called on the Government to amend the terms of reference to include the allegations and cover a wider period.

The debate into the IBRC controversy continued in the Dáil this morning and also occupied much of Leaders' Questions.

He said he wanted clarity and certainty in writing, adding he was not certain they were covered.

Sinn Féin leader Gerry Adams said the terms of reference should not be cut off in February 2013 when IBRC's special liquidators were appointed and he noted almost €22bn in loans were disposed of since then.

He proposed the commission's remit be extended to cover the period up to 12 March 2015.

In response, Mr Bruton said Mr Doherty's files had been examined by Attorney General Máire Whelan and she had given assurances that they would be covered by the commission.

He said Minister for Finance Michael Noonan had also given assurances on the issue.

It is likely the matter will be be teased out further this afternoon when the Dáil debate on the issue resumes.

Mr Doherty said he received a total of 30 to 40 pages last week, which he based his Dáil comments on yesterday.

He said he passed the documents on to Taoiseach Enda Kenny yesterday and asked that he give them to whatever judge is appointed to the Commission of Investigation.

Independent TD Peter Mathews told the Dáil this morning that "we must have openness and light on the biggest banking collapse in the civilised world".

He said that the IBRC and NAMA have combined written-down assets of €60-65bn and people are hurting because of an unjustified Ponzi scheme operated by the Irish banks from 2001-2008.

He claimed that there has been preferential treatment in bidding for some of the loans of the Blackrock Clinic. He said the matter is currently subject to court proceedings.

He named Larry Goodman and his senior accounting advisers, whom he said are former KPMG advisers.

Minister for Transport Paschal Donohoe said today's debate gives the Government the opportunity to put some context on the debate.

He outlined the lead-up to the establishment of IBRC and how the Government has worked to avoid a catastrophe.

He said the light-touch regulatory regime led to a banking sector that was grossly over-sized given the size of the country and that system then collapsed.

He said the blanket bank guarantee compounded the problem.

People Before Profit TD Richard Boyd-Barrett told the Dáil that the Commission of Investigation needs to look into whether the money Mr O'Brien used to buy Siteserv was borrowed from AIB, a publicly-owned bank, at a time when he owed €500m to Anglo Irish Bank.

He said that there already suggestions in the public domain of an improper relationship between Mr O'Brien and former minister for the environment Phil Hogan.

He said the money Mr O'Brien used to buy Siteserv came from AIB, which is publicly owned.

He said that here is somebody who owed €500m to Anglo and then the bank that loaned him the money to buy Siteserv is publicly owned.

He said that this and matters such as the €100m write-down for Independent Newspapers needs to looked into.

Meanwhile, the Dáil Committee on Procedure and Privileges is to write to solicitors for Mr O'Brien and to the chief executive of Siteserv to inform them that Independent TD Catherine Murphy did not abuse Dáil privilege when she made allegations in the Dáil last month about the sale of Siteserv and Mr O'Brien's banking arrangements with IBRC.

The committee will also inform William Fry solicitors, acting for Mr O’Brien, it cannot determine whether or not Ms Murphy breached a High Court injunction when she made allegations about Mr O'Brien's banking details with IBRC. The committee was advised that this is solely the remit of the courts.

In a letters dated 28 and 29 May to the Ceann Comhairle, Sean Barrett, William Fry solicitors stated Ms Murphy had knowingly and gratuitously breached the terms of a High Court injunction, which had prevented anyone from disclosing confidential information relating to Mr O'Brien's personal banking arrangements with IBRC. 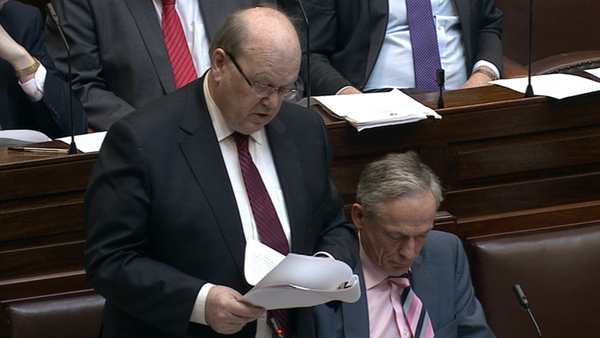 Commission of Investigation to include Doherty comments - Noonan