The Irish Naval Service has said the number of migrants being rescued in the Mediterranean is "biblical" in proportion.

Close to 6,000 people were saved by European rescue vessels in the area over the weekend.

Speaking on RTÉ’s Morning Ireland, Commander Brian Fitzgerald, who is based at naval headquarters in Haulbowline, Co Cork, said while the numbers involved were immense, they were within the parameters predicted by Italian authorities.

Commander Fitzgerald said the navy was being received with "open arms" but said there was "great fear" among the migrants because the vast majority had no seamanship skills.

He said the naval service was most proud of the smallest rescue they had been involved in, when the LÉ Eithne successfully located a tiny vessel last Wednesday, with 12 people on board.

It had been drifting for five days with no fuel or food on board.

The LÉ Eithne docked in the port of Taranto in southern Italy and the 400 migrants on board have begun to disembark.

The boat has returned to the area of operations this afternoon.

LE Eithne docked in Taranto where 399 migrants disembarked. Ship took on supplies and back to sea by 3. #rtenews pic.twitter.com/cDCx07SdYE 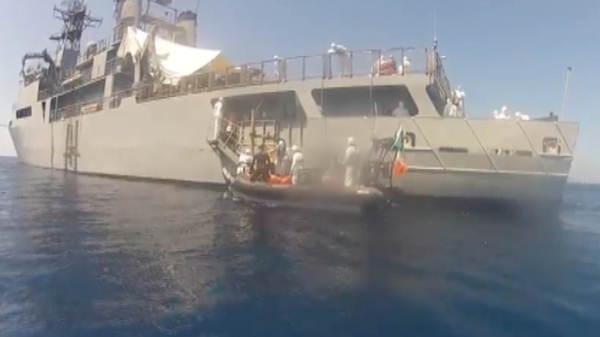