The Irish vote to allow same-sex marriage was a "defeat for humanity", a senior Vatican official has said in the first high-level reaction from the Holy See to last week's landmark referendum.

"Not a defeat for Christian principles, it was a defeat for humanity," Vatican Secretary of State Cardinal Pietro Parolin said in comments quoted by Vatican Radio.

"I was very saddened by this result", he said.

"The church must take account of this reality, but in the sense of reinforcing its commitment to evangelisation," he said.

After the vote, Archbishop of Dublin Diarmuid Martin said "the church needs to do a reality check".

Pope Francis has struck a more sympathetic tone towards homosexuals than many conservative Catholics, famously commenting soon after taking office: "If a person is gay and seeks God and has good will, who am I to judge him?".

But the pontiff has shown no sign of easing his firm disapproval of gay marriage or shifting church doctrine that homosexual acts are intrinsically sinful even if homosexuality itself is not.

In Italy, the government of Prime Minister Matteo Renzi is preparing to present legislation that would allow civil unions between gay couples although there are no plans to allow full marriage.

The referendum has boosted calls in Germany, which allows same-sex civil unions, to go further and legalise gay marriage.

Pressure has started to grow in Chancellor Angela Merkel's Christian Democratic Union, which opposes any change.

"One would think that what the Catholic Irish can do, we can do too," CDU parliamentarian Jens Spahn told the daily Die Welt.

Yesterday, the Osservatore Romano daily newspaper said the Irish vote in favour of gay marriage constitutes "a defeat" that highlights a gap between the church and modern society.

The Vatican daily newspaper spoke of "a challenge for the whole church," and of "the distance, in some areas, between society and the church".

The result of the vote was clear, with 62% of votes in favour and 38% against same-sex marriage.

"The margin between the Yes and the No votes was too large not to be accepted as a defeat.

"It was the result of high voter turnout, notably among young people," the Vatican paper stated.

Cardinal Georges Cottier, a noted Church theologian, was cited by the Osservatore Romano as saying it was impossible to understand the referendum result "without taking into account the paedophilia scandal which has rocked the Irish church". 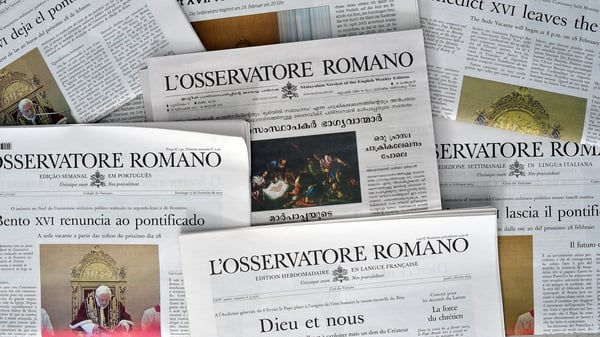