The Secretary General of the United Nations Ban Ki-moon has praised the result of Friday’s referendum on same-sex marriage.

Speaking after he accepted the Tipperary International Peace Award in Co Tipperary this evening he said Ireland’s strong commitment to human rights was seen in the same-sex marriage referendum.

"This is a truly historic moment: Ireland has become the first country in the world to approve marriage equality in a nationwide referendum.

"The result sends an important message to the world: All people are entitled to enjoy their human rights no matter who they are or whom they love", he said.

Mr Ban said the peace award pays tribute to him but also to the work of the UN.

He also said he should give an award to Ireland for global citizenship for its commitment to human rights and its role in peace keeping and development.

Previous recipients of the peace award include Nelson Mandela, Bob Geldof, former Irish president Mary McAleese and in 2013 the Pakistani schoolgirl and activist Malala Yousafzai, who survived being shot at point blank range by a Taliban gunman for going to school.

It is the first of the UN chief's engagements in Ireland over the next two days when he will also deliver a keynote address in Dublin tomorrow night touching on Ireland's role in international peacekeeping and the migrant and refugee crisis in Syria and the Mediterranean.

Martin Quinn, honorary secretary of the Tipperary International Peace Award, said Mr Ban was being honoured for his work on climate change, a new development agenda and the response to conflicts and natural disasters.

He said: "At a moment of division, you have sought to be a bridge-builder; in a period of economic upheaval, you have strived to give voice to the world's poorest and most vulnerable people; and in a world of deepening interconnectedness, you have pursued wide-ranging efforts to adapt the United Nations to face a new generation of challenges and threats." 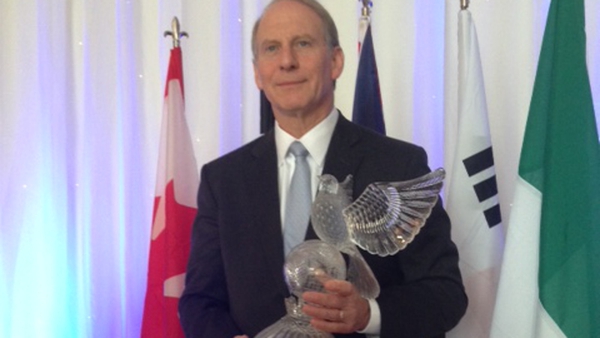