Parents of babies who died at the Midland Regional Hospital in Portlaoise have called on Minister for Health Leo Varadkar to set up an investigation into all levels of HSE management.

At the Oireachtas Health committee today, families said what happened was a scandal.

The parents of a baby girl who died a day after being told there were no concerns for the pregnancy made an emotional appeal at the Oireachtas health committee.

Amy Delahunt, whose baby girl died at the Midland Regional Hospital in Portlaoise, said Health Service Executive Director General Tony O'Brien must "stop misinforming the public that these events were before his time at the HSE".

She told the Oireachtas Joint Committee on Health and Children that Minister for Health Leo Varadkar must initiate an investigation into all levels of HSE management "in relation to this scandal".

She said HSE management was "clearly incapable" and could not be trusted to implement the latest HIQA report and previous reports.

Her partner Ollie Kelly said enough hurt and pain had been caused as he explained the aftermath of their daughter Mary Kate's death.

Mr Kelly was told at a meeting at the hospital that staff had never seen "anything like that before" and the nurse and doctor in question were "very sorry".

When he asked if a system analysis had been done, he said he was told it had, and if the parents wanted it, they would have to apply for it under Freedom of Information.

Mr Kelly said he and Ms Delahunt believed Mary Kate died for a reason - to make the maternity services safer. He said they grieved in the belief that her death was "for the greater good".

Ms Delahunt and Mr Kelly were with other bereaved parents of babies who died at the Midland Regional Hospital Portlaoise.

Their appearance before the committee follows the recent publication of a HIQA report, which was highly critical of safety and standards of care at the hospital.

Mark Molloy, whose son Mark died shortly after he was born at the hospital in January 2012, told the committee that he and his wife Róisín have spent the intervening years fighting "against considerable opposition" to get an answer as to how their baby died.

He said that question was answered following information received under Freedom of Information in April 2014, but said the Health Service Executive had answers "within days" of Mark's death.

Mr Molloy said there appeared to have been an attempt at both local and national level to suppress repeated known red flags, which perpetuated failings leading to repeated deaths and injuries at a huge emotional, physical and financial cost to families and patients.

The HSE director general said there will be a formal disciplinary investigation into the response to risks and an absence of compassion in care.

He also said that the suggestion that no one of seniority responded to the RTÉ's Prime Time report on maternity services at the hospital is completely untrue.

This afternoon, Mr O'Brien said Ireland's health system can only be compared to Iraq's.

Asked at the committee if he thought Ireland's health system was odd by nature, Mr O'Brien said he believed it was.

He said the mixed model and nature of the health service in Ireland in relation to the public and private mix is comparable only to "post-Saddam Iraq". 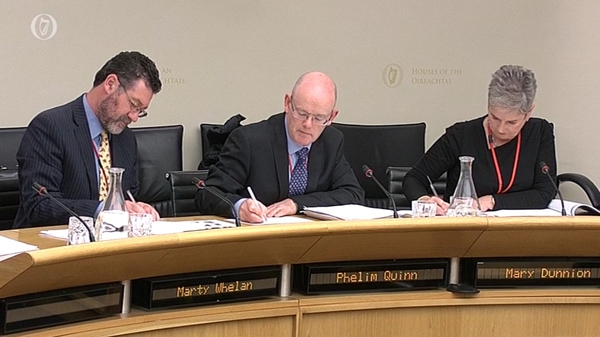