The direct provision system is not fit for purpose and should be replaced with a reception system that respects the dignity of all persons in line with best international practice, according to a new report.

Around 4,360 asylum seekers are living in direct provision centres around Ireland.

The report, which was published by the Oireachtas Joint Committee for Public Service Oversight and Petitions this morning, found over one-third of asylum seekers in Ireland are children.

It described the living conditions as "intolerable" and "cramped", with little private space for parents with children.

It said many of the children living in the centres were born in Ireland but do not enjoy the same rights as other Irish children.

According to the report, the person living in direct provision for the longest time has been there 11 years and the average stay is five years.

The report found the delay in processing the applications of residents "inexcusable".

It also recommends the responsibility for inspections at the centres be carried out by an independent body such as the Health Information and Quality Authority.

The chairman of the Public Service Oversight and Petitions Committee has called for direct provision to be scrapped.

Speaking on RTÉ’s Morning Ireland, Pádraig Mac Lochlainn said after visiting asylum seekers in centres around the country the committee felt it had to comment on the overall system.

"These centres were only ever intended for residents for six months while some have been there for 11 years, which is outrageous. You can't work and live on €19 a week. They are living in limbo."

Mr Mac Lochlainn admits that he is not sure what the direct provision system should be replaced with.

However, he said changes to the current application process for residency need to be made.

"For certain the current application process is way too cumbersome, three separate applications for residency that drags on for years.

"That needs to be sorted out. Ireland is the only country in the EU that opted out of a directive which allows people to work after nine months."

In April, Minister of State with responsibility for New Communities, Culture and Equality Aodhán Ó Ríordáin said on the 15th anniversary of direct provision that it was not an occasion to be proud of and marked a regrettable period in Irish history. 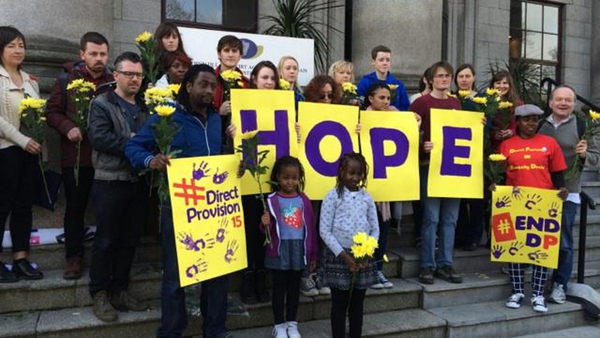