Chief Executive of Ulster Bank Jim Brown has told the Oireachtas finance committee that the bank has made significant progress in helping 22,000 customers in resolving their mortgage difficulties.

However Mr Brown told the committee that there were 2,000 customers who would neither pay their mortgage nor engage with the bank.

He said numerous efforts had been made to try to engage with these customers.

In an opening statement to the committee hearing this afternoon, Mr Brown said it was unacceptable for a borrower to make no payment whatsoever towards the cost of their accommodation.

Mr Brown said it was Ulster Bank's belief that its standard variable mortgage rate was not overpriced.

He said the current narrative that standard variable rate minus the European Central Bank rate equals the margin was incorrect.

Mr Brown said the reality was that there were a range of other costs which also must be factored in to the standard variable rate, and he said these costs were substantially higher in Ireland compared to other markets in which Ulster Bank and RBS operated.

Responding to a question from Labour Deputy Pat Rabbitte, Mr Brown said Ulster Bank had no intention of reducing its standard variable rate.

Ulster Bank's Chief Risk Officer Stephen Bell said there had been no write-down of debt in 2014 where the customer had been left in the property.

He said there had been write-offs where properties had been sold at the end of a repossession process.

Ulster Bank Chief Risk Officer Stephen Bell told the committee when banks were looking at capital they had to put behind particular assets they had to look at the historical performance of the business as a matter of regulation.

He said the historical performance related to the previous ten years.

Deputy Fleming asked if it was fair that new customers, young people in their 20s, who were now borrowing were going to have to pay a higher interest rate in the South solely because of the historical performance ten years ago.

Deputy Richard Boyd Barrett said the feeling was that the banks were unloading the costs of their own mistakes onto the variable mortgage holder, and that therefore the cost was greater here [in Ireland] because we had been through the crisis.

Jim Brown said that was not what the bank was saying, he said the property crisis was a factor but there were several other factors.

Bank 'happy to engage' with minister

Mr Brown said that Ulster Bank had been progressively reducing its rates for existing and new customers, and that there were a wide range of fixed rates available which were lower than the standard variable rate.

He said Ulster Bank was more than happy to engage with the Minister for Finance on the issue.

Referring to the 2,000 customers who would neither pay their mortgage nor engage with the bank, Mr Brown said there had been very clear communication with these customers from Ulster Bank, the Government, the Central Bank, the Insolvency Service and from the court process.

He said Ulster Bank had come out with commitments for treating customers in arrears so that it was a fair process.

Mr Bell said Ulster Bank was still of the view that the vast majority of cases could be resolved without the need for a principle write-down.

He said the bank's preference was to regard arrears as an affordability issue. 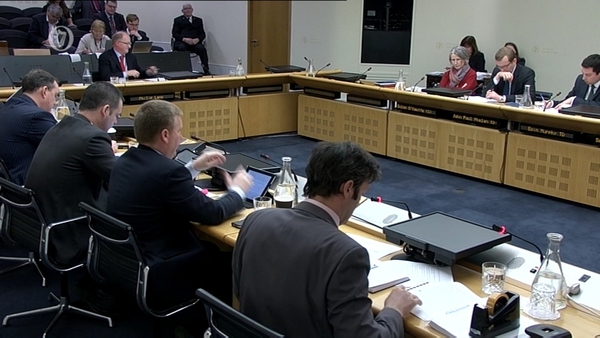